The new version of Celestron's C90 was the surprise star of my recent 90 mm Mak Comparo.  While it wasn't up to the standards of the mighty Questar, it came embarrassingly close, for almost no money.  First introduced in the late 1970s for around $495 (over $1100 in 2010 dollars!) Celestron's C90 has reappeared in a modern, Chinese-made version.  These new C90s have nothing in common with the traditional USA-made Celestron models, save for the name and a similar optical configuration. 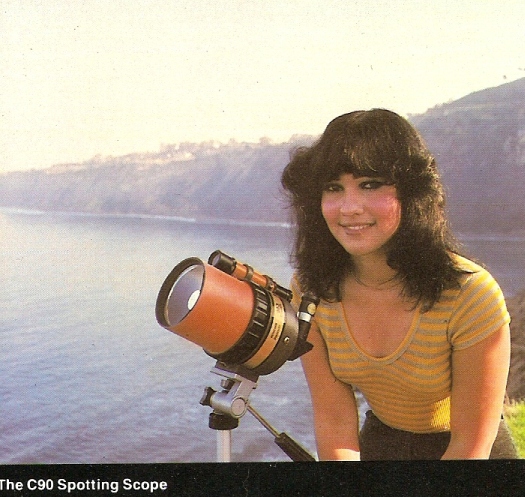 The original C90 has been much-maligned in the past, although I suspect some of the blame goes to the chintzy .965" eyepieces and the tiny 5X24 finder.  It also didn't help that some people back then bought the spotting scope version and mounted it on a flimsy photo tripod.  Unfortunately, the same thing is going to happen with the 2010 version.  The supplied tripod isn't nearly strong enough to hold the OTA (and with a 1250 mm focal length, you really need a good tripod.)  Despite my ample warnings in the Mak Comparo about using a dedicated astro mount, some readers -mostly beginners- bought C90s based on the article and wrote me back complaining about the shaky tripod.  So I'll say it again - don't use the supplied tripod.  For the scope, anyway (I use the tripod to hold my point and shoot digital camera during the holidays.)  For proper mounting, I'd suggest at least a CG-4 class mount (about $225 street.)  If you have a CG-5, you are in really good shape.  The scope comes with nice thoughtful touches, like an indented Vixen-style dovetail plate, removable finder, and a screw-off visual back.  The build quality is excellent; the scope feels heavy and serious in your hand.  You'll want to ditch the cheap 45 degree diagonal in favor of an astro-specific 90 degree diagonal. 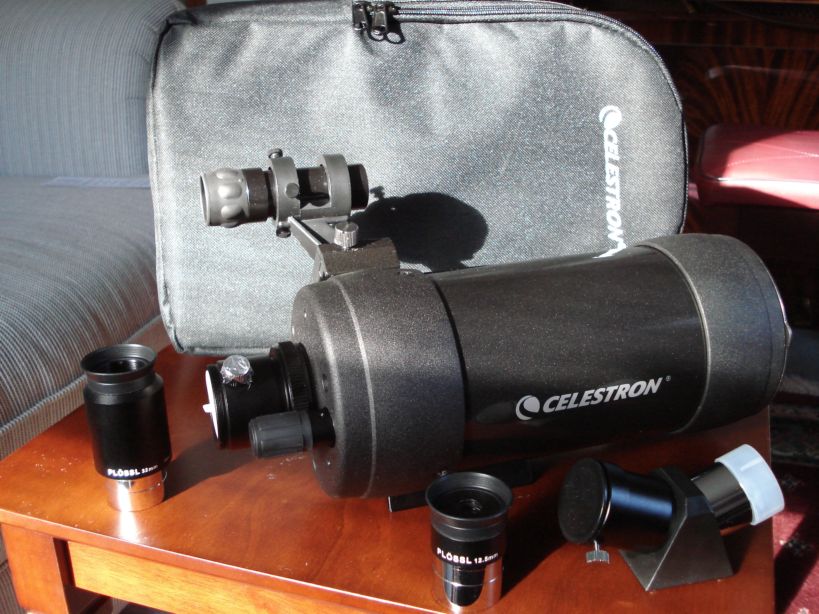 I won't rehash my comments from the Mak Comparo -you can read them for yourself- but I will say that if you have the mount issue resolved, this new C90 is one of the great bargains in astronomy today.  You get a nice scope, and tons of accessories for no money.  Mine is only slightly out of collimation, nothing much to worry about, and has really nice spherical correction.  Mine has no image shift and the focusing action is excellent.  At star parties, it shows impressive views on the moon, Saturn, and Jupiter.  Deep sky observing is, of course, less interesting.  With only 90 mm of aperture and a tiny finder, you're limited to the brighter showpiece objects.  I did wind up showing M31, M13, Albireo, and M15 to the public, but the views were dim (some members of the public had trouble seeing M13 at all.)

I seem to have "sold" a lot of these C90s as a result of the recent article, and you might be interested in the comments I've gotten back.  Overall, the quality control seems very good.  A couple of people did write back to tell they got an optical clunker.  In those cases, the retailer did offer a refund or replacement.  Some wrote back that their optics were superb - no miscollimation, and near-perfect optics.  The moral - buy new, not used, unless you can personally evaluate the sample (how much money are you going to save anyway - they're practically giving new ones away.)

This should not be your only telescope.  You need something bigger to show you the dimmer deep sky objects.  In Celestron's own line, their C6 or C8 would both make excellent daily-use telescopes.  Still, for a second scope, a knockaround OTA, or for a public moonwatch, these new C90s are hard to beat.

It took me 30 years to get my first Schmidt-Cassegrain.  Now, in the span of a few months, I have a C8, a C6, and now this C5.  I don't know what took me so long.  I've wanted a C5 ever since I first saw an ad for one, around 1980.  The C5 has had a long and rich history.  There's so much lore here that I'm tempted to start a C5 tribute page, much like I did with the C8.  The C5 was first introduced around 1971 as a smaller alternative to the C8.  The cost was $500.  Since then, there have been a number of versions - orange tube, black tube, white tube, and (in modern versions) orange tube again.  This version, in white, hails from about 1992, or about midway through the life of the C5.  Although they've had an excellent reputation for optical quality, their popularity has been hampered by their relatively high cost.  At one point in the 1980s, a C5 cost as much as a C8.  Smaller does always mean cheaper!  Sometimes the opposite holds true.  A manufacturer's fixed costs (labor, advertising, etc) are the same no matter what they sell.  And if they can't enough of the smaller version, the costs can actually rise.  Ask any model railroad enthusiast.  The tiny N scale stuff costs as much, and sometimes more, than HO.

I'd been in the market for a C5 ever since I got my C6 last spring.  The C6 was so good, I started to wonder what the views would look like if I backed off on the power a little, and I was willing to give up a little aperture to get it.  I was also looking for a portable SCT to test my new William Optics binoviewer (review coming up!)  I picked up this C5 on ebay for a steal.  It came complete with hard shell carrying case (boy do I miss these!)  When I opened the case, I was greeted by a pristine-looking optical tube, and accessories still shrink-wrapped in sealed plastic.  Hmmm...  And although the scope is almost 20 years old, I thought I could detect that telltale whiff of fresh foam.

Popping off the dust cap revealed a corrector plate with no dust on it whatsoever.  Also, these older C5s came with a Vixen-style dovetail plate.  Upon examining it, I could not find a single bit mark on it.

This scope had never been used. 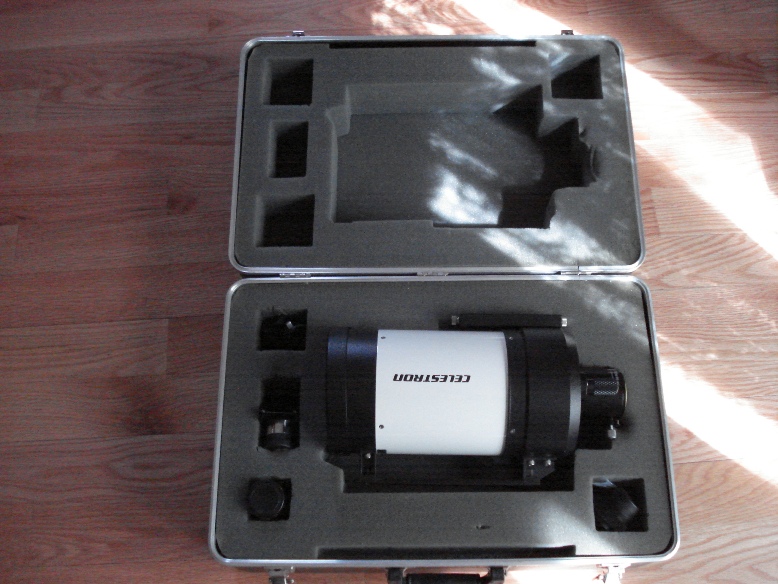 I've gotten NOS (new old stock) scopes before, but never anything this old.  In fact, while mounting it, I felt so guilty about putting the first bite into the dovetail plate that I wound up swapping out one of my Astro-Tech plates.  So the original plate is still pristine.  Also, I installed a modern Rigel Quik Point, and used a newer TeleVue SCT visual back.  I also took off the accessory bar.  By the way, playing with the hardware turned up a quaint problem - as these scopes were made in California, they used English hardware.  It took me a while to find the right hex keys to fit the bolts. 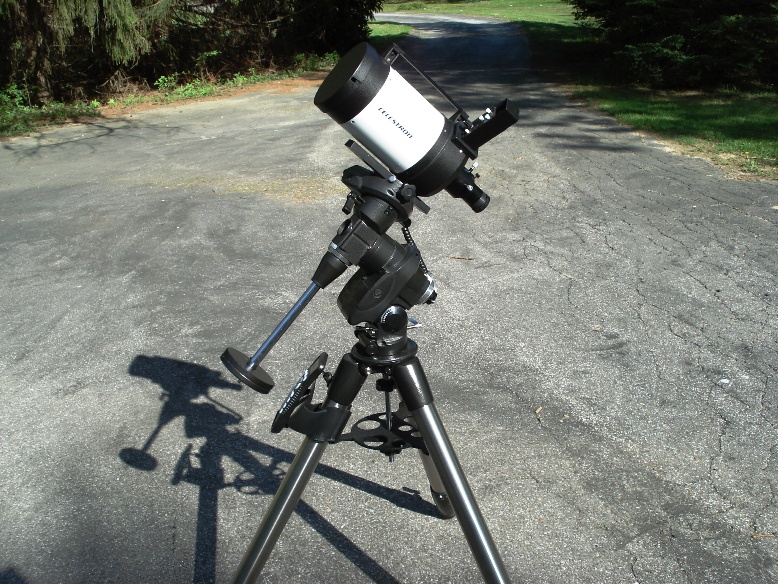 The C5 on a CG-5 mount, with Astro-Tech plate, Rigel finder, TeleVue visual back

The scope looks handsome on the CG-5.  A nice bonus: it balances with the 4 lb counterweight, making for a sturdy, lightweight observing package (with the C6, you need the 7 lb counterweight.)  If all you've got is a CG-4, it should be fine also.

I first took the scope out observing on a clear night in late summer.  Unfortunately, the OTA arrived in the worst state of collimation that I have ever seen on a telescope.  When I defocused a star, the shadow of the secondary was actually outside the diffraction ring.  Fortunately, club member Mike T is a whiz at collimating SCTs.  The following night we worked together (ie, I did what he instructed me to do) and we got the scope collimated at nearly 400X.  Wow, what a difference!  Star images were crisp and contrasty, and the moon looked so good I was itching to image it.  The star test showed only minor spherical aberration and no astigmatism, even at high power.

The difference that collimation makes: before and after 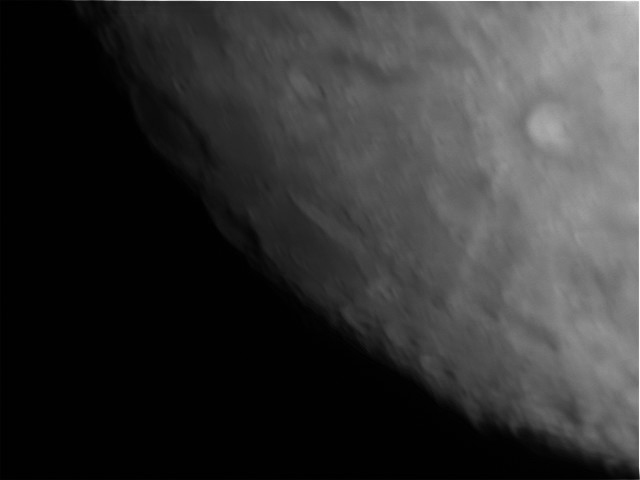 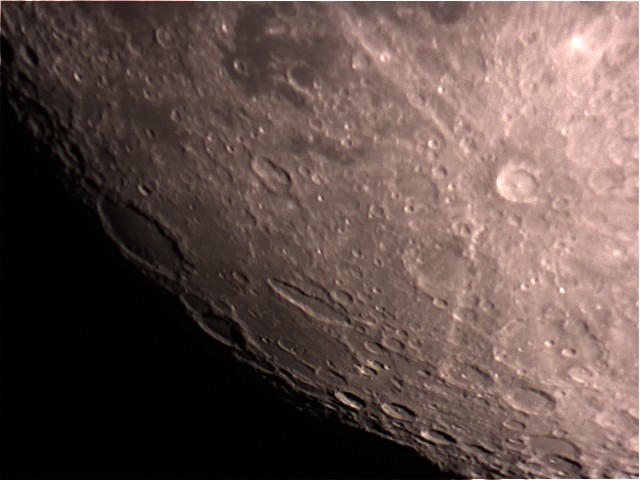 The scope performs very well.  It will split Delta Cygnus.  The Double Double is no problem at 100X.  At public star parties, you will amaze people with views of the moon, Saturn, and Jupiter.  Also, the scope's light weight -barely 5 lbs for the OTA assembly- means that you're packed up and on your way before anyone else.  The C5 works wonderfully with my new William Optics binoviewer.  Put in a pair of 25 mm Plossls and you can see the whole moon at once.  At a recent library skywatch, one club member declared that the WO binoview/C5 combination resulted in one of the best views he'd ever seen on the moon.  I'll have more to say about the topic in a later article, but suffice it to say that if you get it right, binoviewing can knock your socks off.

Drawbacks?  In a word: aperture.  5 inches can only do so much.  It may not sound like much, but the 1 inch increase provided by the C6 puts it into another category.  There seems to be a tipping point somewhere between 5 and 6 inches for an SCT that means the difference between a nice, lightweight introductory scope (the C5) and a Serious Telescope (the C6.)  As nice as the C5 was, substituting the C6 seemed to open up another world.  This was especially true on deep sky objects like M15 and M92.  In the C5, the globulars were nice, but barely resolved blobs.  The C6 resolved them almost to the core, and was significantly brighter.

Near the end of October 2011, New England was hit by the worst fall snowstorm in history.  The now-infamous "Snowtober" storm of October 29th, 2011 knocked out power to over 3 million residents for almost a week.  Now, it is a major pain to live without power in a cold part of the year, but there was a nice bonus - the skies were darker and clearer than I've ever seen in this area.  During that time, I had the C5 out almost every night.  One night I spent the entire evening looking at galaxies in Pegasus, something ordinary observers don't usually do.  Another night was spent picking out clusters in Cassiopeia.

New versions are sold as NexStar 5s with a computer-controlled mount.  Should you get one?  If you must have the utmost in portability and lightness in an SCT, you can't go wrong with a C5 (any of the versions.)  But if performance is an issue, you really should get a C6, or larger.  I've gone from owning none of these Celestron "Cats" to four (C90, C5, C6, and C8) in less than a year.  Logic dictates that there is some overlap and that I should sell one or two.  But I can't bear to part with any of them, so I'll keep them all.  But...ask me in 6 months and see what I say... 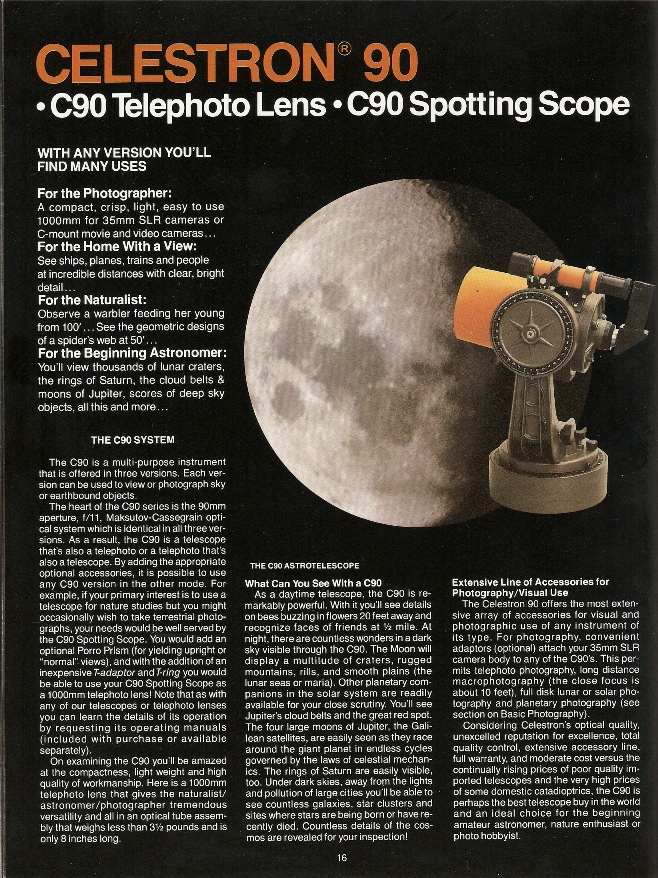 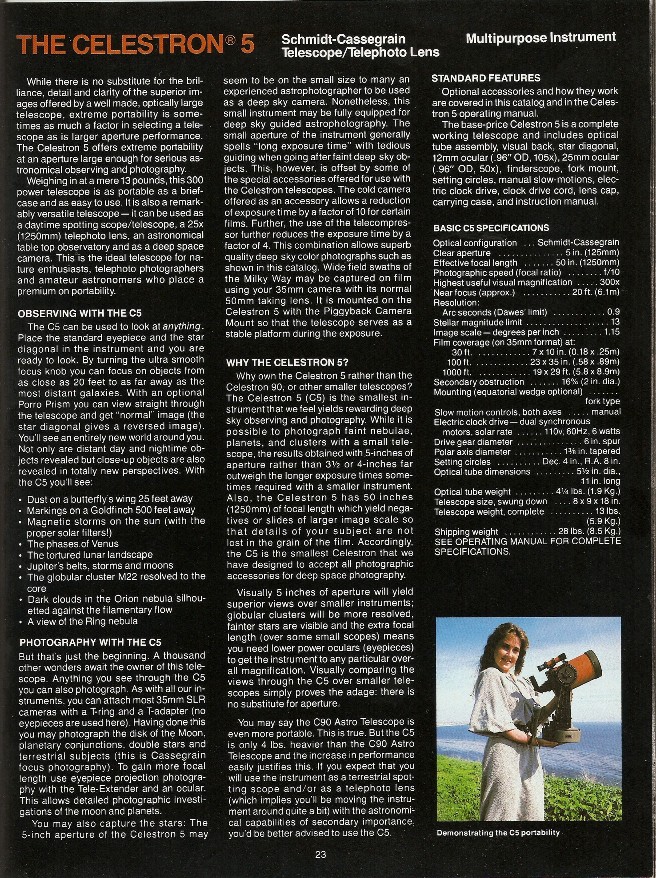 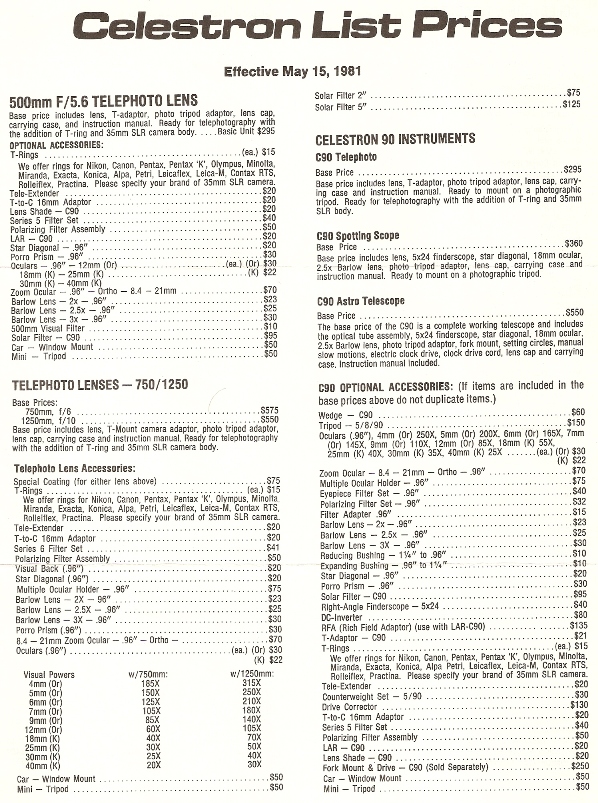 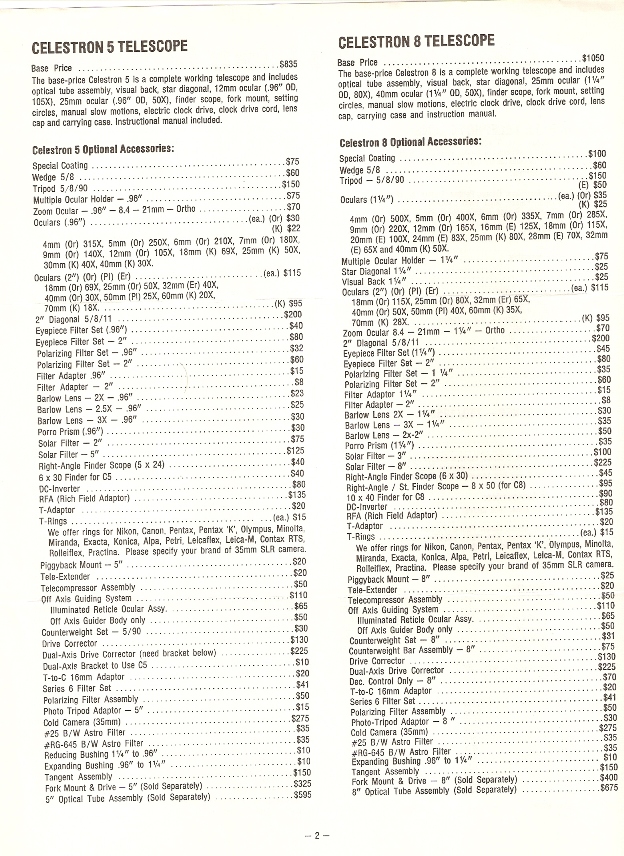