This product was a head-turner for many of us at NEAF in 2017.  The Star Adventurer and Star Adventurer Mini (along with a similar-looking pair of products from iOptron) had us reaching for our credit cards.  For years I had resisted buying a Vixen Polarie tracking mount (and its clones) put off by its high price, lack of features, and some sample-to-sample variation I'd seen.  The Star Adventurer looked to be a game changer.  Right away, it addresses the lack of flexibility in the Polarie-class devices - there are so many modes, speeds, and features on the Star Adventurer that a year later, I haven't even begun to try them all (it will act as its own intervalometer, for example.)  There's a big dial on the side with seven tracking modes, a mini USB charger (the unit also runs on 4 AA batteries) a pair of programming switches, an RA autoguider port(!) and a built-in polar scope.

Let me repeat that - you don't have to pay extra for a polar scope.  Finally.  Someone out there has been listening to us. 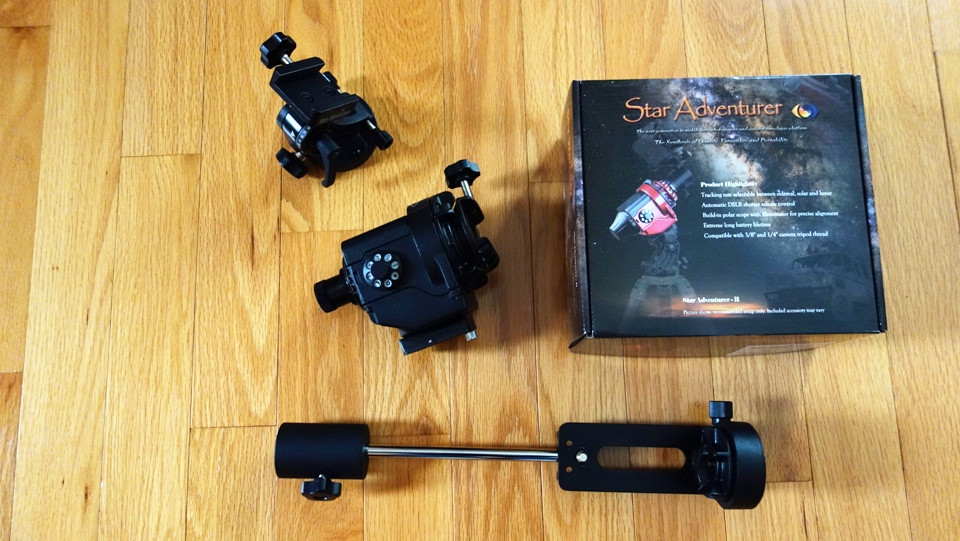 Having said that, if you're even semi-serious about using this as a tracking mount or an astrophotography tool, you're going to need to shell out for the mandatory equatorial base, and you'll likely need the counterweight and bar also.  So you don't quite get everything you need for your $329.  Ah.  What Skywatcher giveth, Skywatcher taketh away.

I've spent almost a year with the device now.  It's gone with me down to Chile, to Oregon for the solar eclipse in August of 2017, and to many skywatches.  It's small enough that I can run an imaging rig almost anywhere, even off to the side during public events.  I've come to depend on it, and I've become comfortable with it to the point where I don't give any thought to its tracking accuracy or reliability.  So if you've been thinking of buying one of these and don't like reading reviews, you can stop right here.  I highly recommend this product.  This is what we've been waiting for.  It's not just an astrophotography tracking platform, it's halfway (maybe even more so) to a full-fledged equatorial mount.  I've even used it that way at small skywatches.  If you have an Orion Short Tube 80, or a 90 mm Maksutov, or another optical tube in that class, the mount will work just fine (Skywatcher's instruction manual shows it carrying a small Schmidt-Cassegrain, but I think that's pushing it.)

My usual setup puts the Star Adventurer on the equatorial wedge atop either my Induro CLT104 carbon fiber tripod, or on my trusty old Bogen 3001, which I am starting to think is going to outlast me (it has survived numerous mishaps, including a baggage handling error that crushed my carryon and destroyed most of its contents but left the tripod unscathed.)  I usually leave off the counterweight bar, opting instead to mount a ballhead (normally an Induro BHD1) right onto the Vixen-compatible plate - lighter, simpler, and cheaper.  I slung this rig over my shoulder and hiked innumerable miles down in Chile looking for good dark spots.  With a good polar alignment (thank you again Skywatcher for not charging extra for the polar scope, other manufacturers are you listening?) I found the unit will track a full frame camera with a 50 mm lens out to five minutes with little to no error.  In a place like Chile you don't need five minutes, so I kept my frames on the conservative side at two to three minutes. 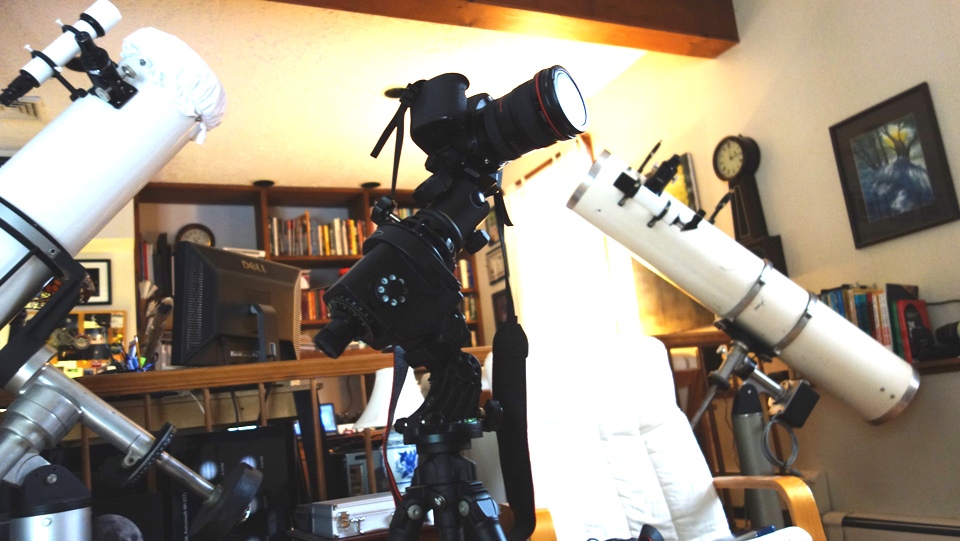 (Above) One common configuration - a camera (EOS 6D) mounted directly to the Vixen plate. Note how this arrangement covers up the polar scope. 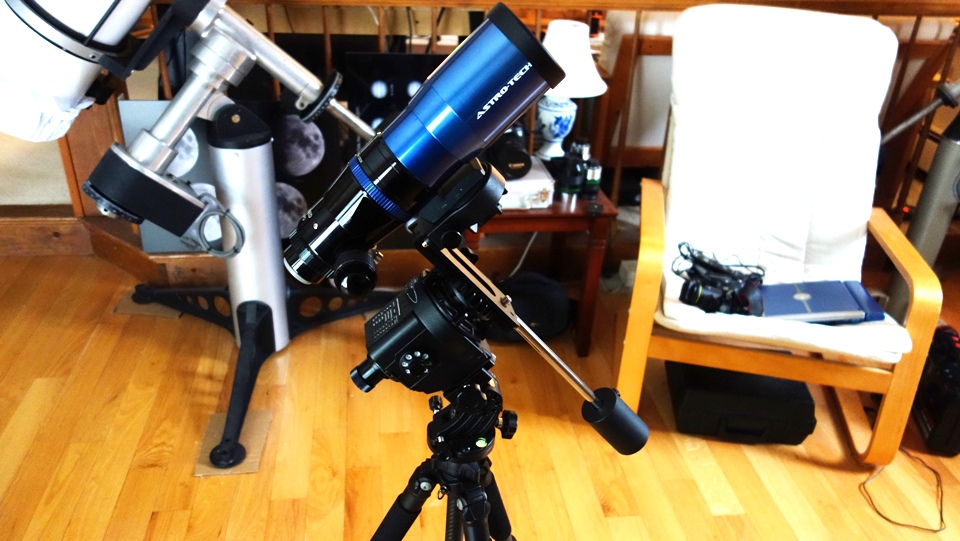 (Above) Another possible configuration - mount a small telescope using the counterweight bar.  Note slot in bar that allows the use of the polar scope.

Complaints?  Other than the flimsy battery cover that everyone's complaining about (it will get lost or broken, and feels like a cheap part that wandered in from a lesser product) I only have one, and it's the kind of thing that will bother people like me more than the layman.  I applaud the Vixen-compatible plate, but they've mounted it right smack in front of the unit, where the polar scope looks out.  Mount something on the plate and it covers the polar scope.  So of you want to use the polar scope, you've got to take everything off, sight Polaris, and then put your tube/camera back on.

The plate is 90 degrees away from the place where you expect it on "top" of the mount, where there was ample room to place it.  Every time I look at the mount, I want to turn my head sideways; it doesn't look right.  If they had just mounted the plate on "top" like everyone else it would have solved the problem of covering the polar scope.  I'm sure some engineer is going to write in and tell me why the existing arrangement is correct, but let me put it this way - if this is right, why don't all mount manufacturers do it this way?

I know, I know.  You can use the counterweight bar, which is slotted and allows the use of the polar scope with your equipment attached.  And yes, this will work.  But I have three objections to this arrangement.  It adds cost to the setup, it adds weight and complexity, and -inexplicably- you lose the functionality of the Vixen plate.  The counterweight bar has a 1/4" X 20 threaded screw at the top.  Don't be surprised to see metalworking amateurs offering custom solutions to this problem.  For these reasons, I almost never use the counterweight/bar assembly unless I absolutely have to.

If I seem overly critical of this one aspect of the design, understand, it's because I like the product.  I like it a lot.  It's so close.  I like it so much I am thinking of buying another one as a backup (maybe I'll get the iOptron version for variety.)   Is it too much to ask for a minor redesign and relaunch in a Mark II version? 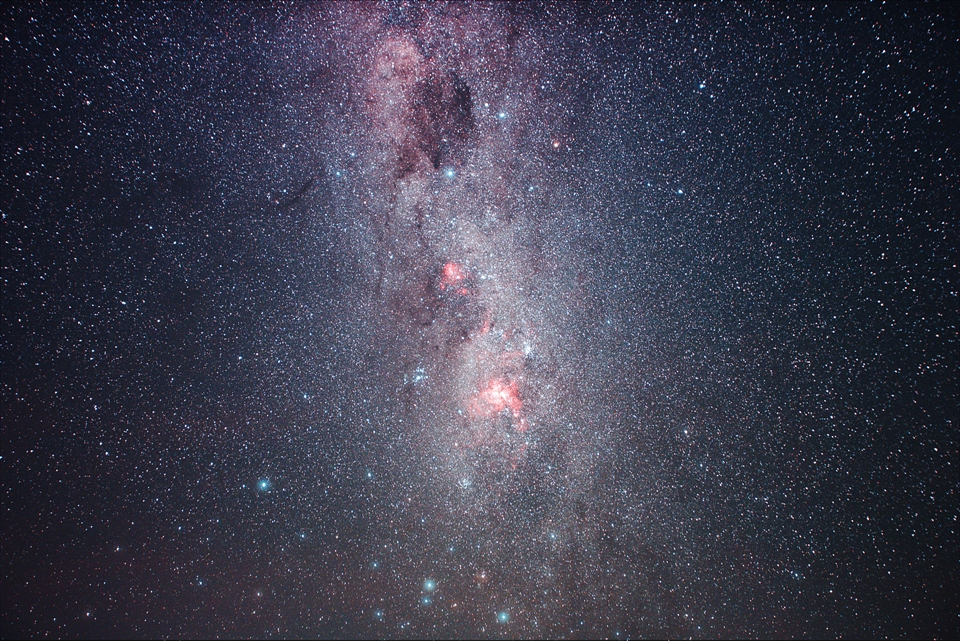 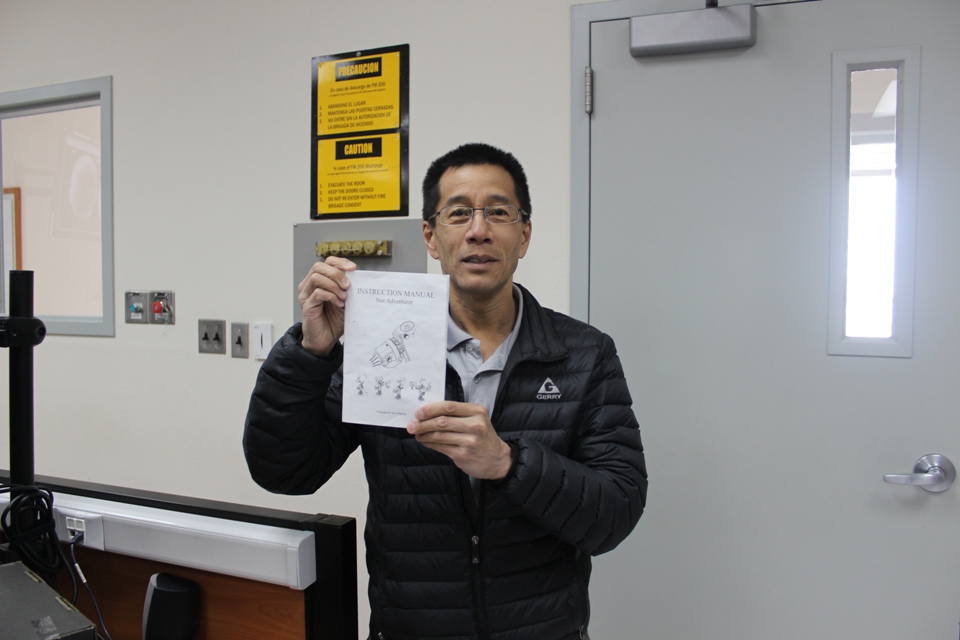 (above) I travel all the way to Chile to the CTIO Observatory and what do I find?  A Star Adventurer mount and manual on a technician's desk. 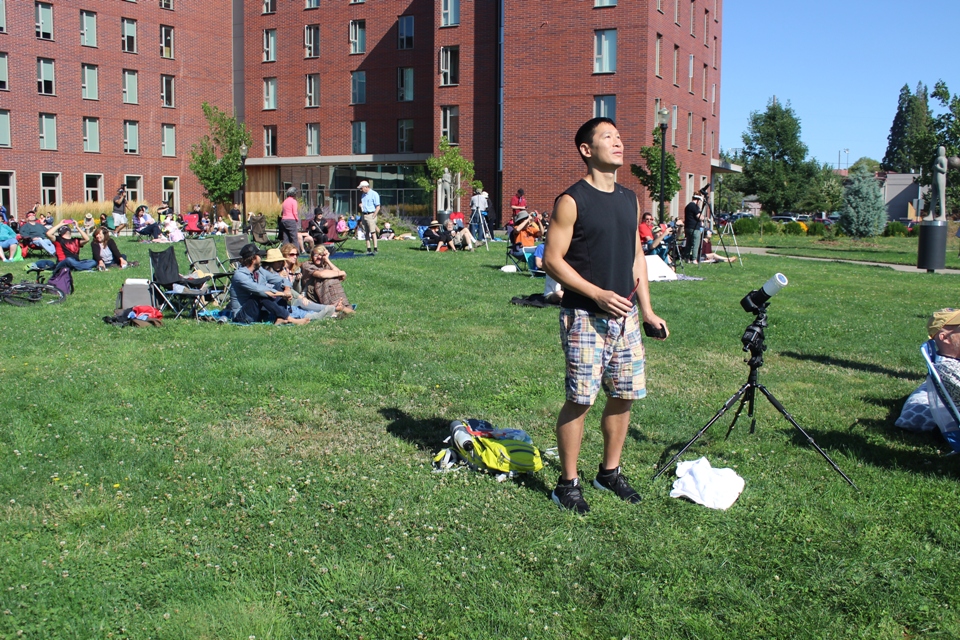 (Above) At the solar eclipse on the Oregon State University campus.  They were so nice, they charged $600 a night to stay in their dorm rooms.

Star Adventurer and Canon T3i on the right.

(Above) I did a rough polar alignment and didn't have to touch it all morning.  Tracking accuracy was excellent. 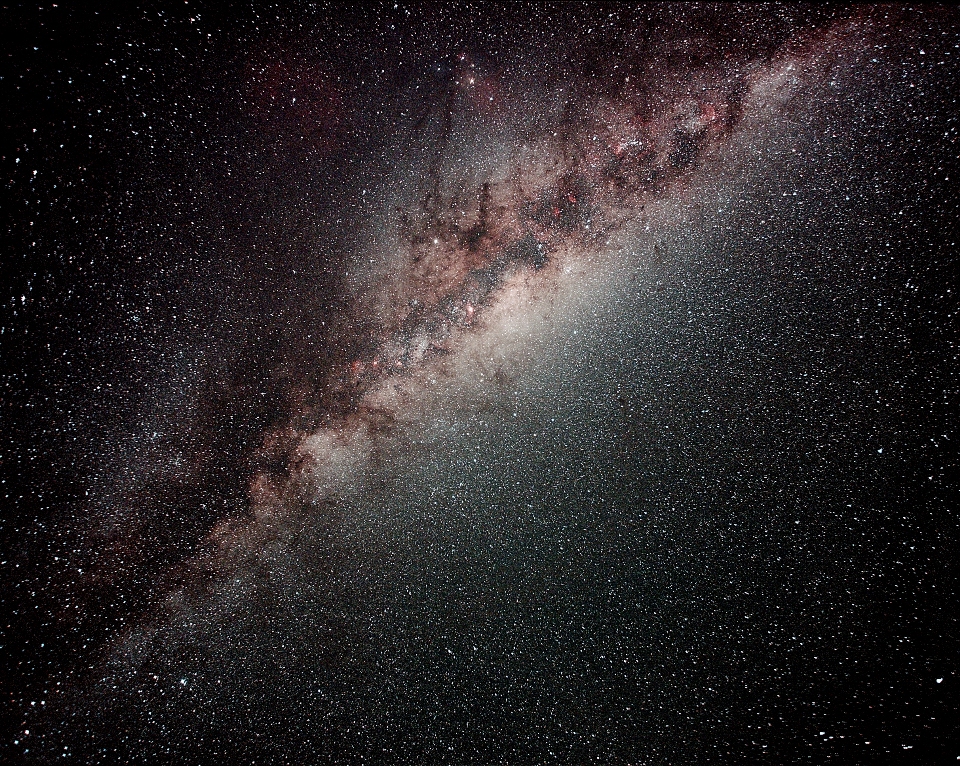 (Above) The Milky Way from La Serena Chile.  It really does look that good down there. 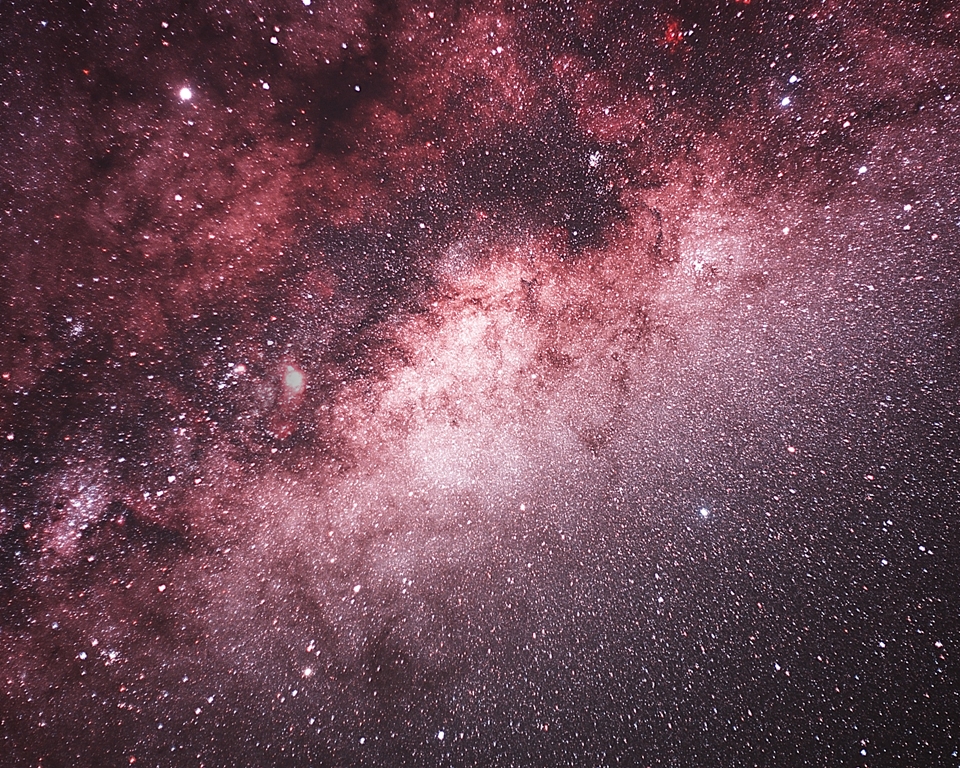