(8" f/6 Dobsonian Newtonian, many different configurations from Orion starting around $349, check current prices as they vary)

Ever have this happen to you?  Your rig is up and running, and it's really humming.  The views are just snapping for you.  In your enthusiasm, you call your friends over for a look.

"Just isn't very sharp, is it?" says the guy with the high-priced apochromat.

Then the third guy, with the giant "Q" plastered on the front of his T-shirt, refuses to even look through your telescope because "it isn't a Questar."

Is there one telescope that will do it all?  Of course not.  But if there's one model that might earn begrudged acceptance from all three of those guys above, that telescope might be the old, reliable 8" f/6 Dobsonian.  Over the past fifteen-plus years, I have recommended this telescope, along with its smaller brother, the Orion XT6, more than any other model, by far.  If you glance through this web site, you'll also see these are some of the cheapest telescopes on the market.  Orion has sold about a bazillion of them, and if you're a bargain hunter, you can sometimes find used samples for next to nothing.

Earlier this spring, I found myself laid up for weeks due to major reconstructive surgery on my jaw, which had caused me much discomfort over the years.  My jaw was wired shut for weeks and I could only communicate by writing on a notepad.  Although I was otherwise physically fine, I hated going out.  For one thing, when your jaw is wired shut, everyone speaks louder to you (I was not deaf.)  Others assumed I had a mental handicap, and more than once, after conducting a perfectly coherent conversation with a store clerk (with my part written instead of oral) I was told that I "spoke very good English." 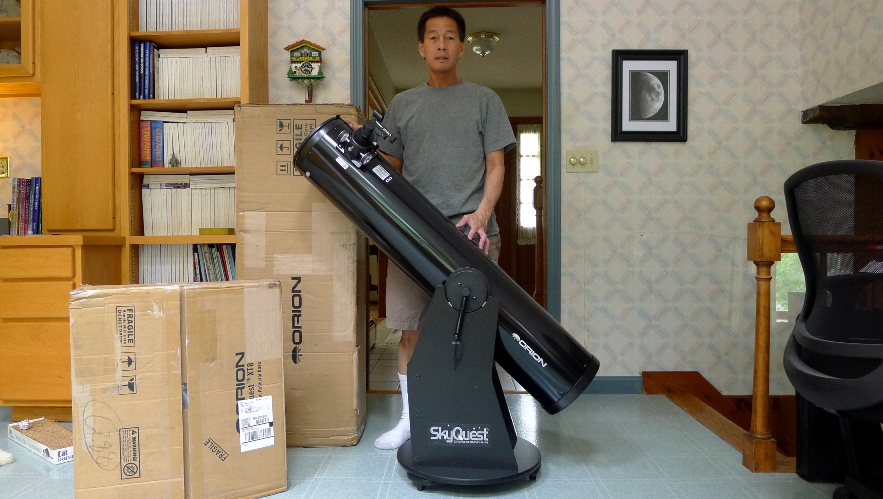 So I stayed inside.  This can be dangerous too, since I had nothing to do but cruise Astromart and the "Clearance" section of Orion's web site.  I ordered stuff.  A lot of stuff.  I am embarrassed to tell you how many telescopes I had in the house.  It's months later, and the only one still left from that period is the XT8.  I've said this so many times, but it's still true - an XT8 is simple, cheap, and will show you a lot.  What more could you ask for?

Another side effect of my enforced isolation - I found myself evaluating some unrealized goals.  Some of these were simple.  For one, despite having looked at them countless times, I've never bothered to get my Astronomical League Messier observing certificate.  Half a dozen observing nights later, I submitted my list, and the certificate came through a couple of months later.  The scope I used?  I have a house full of scopes, and I chose the Orion XT8.  Why?  It's got enough aperture to burn through those dim galaxies in the Virgo Cluster, it's simple, it's portable, and the optics are really good.  Towards the end of the list I got impatient for the sky to roll around, so on a couple of nights I set my alarm for 2 AM and hit the early fall objects.  When you're up at 2 AM, the last thing you want to do is fiddle with wires, initialize (and sometimes troubleshoot) a computer, or lug around a $4000 apochromat.

How does my sample perform?  This one's really good.  Whoever's doing these mirrors for Orion has been doing a really good job lately.  I haven't seen a bad one in a long time.  It's sharp enough to give more expensive scopes a run for their money on Jupiter and Saturn.  I have an 8" Portaball with a Zambuto mirror, and having these scopes side by side, yes, the Portaball wins.  It's easier to pan around, lighter (32 lbs vs 41 lbs) the mirror has impressive contrast, and it star tests better.  When I'm in a finicky mood, I'll use the Portaball.  But the XT8 is shockingly good, especially considering its price.  The XT8 costs about 1/10th what the Portaball costs. 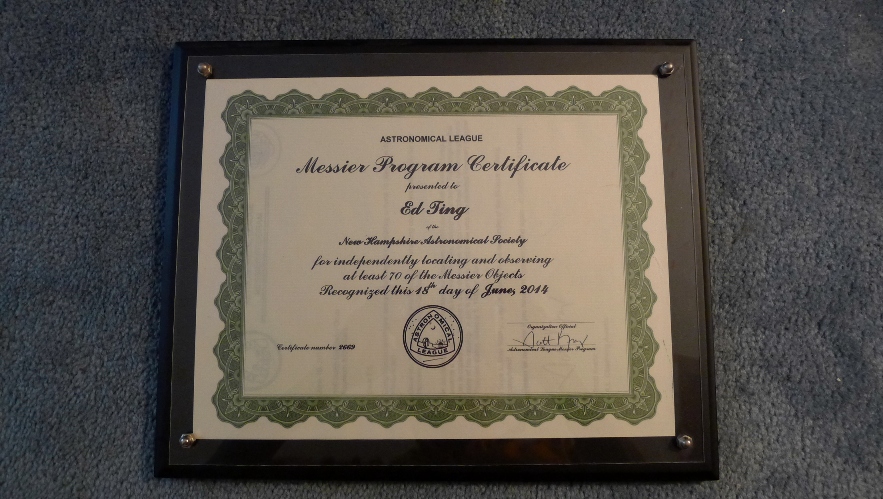 My Messier certificate, earned mostly with the Orion XT8

People often ask me whether they should get the bare-bones XT8, or the tricked-out version with the Intelliscope.  It's a personal choice, but I prefer the simple model.  I work with computers all day, and the last thing I want to do is use one at night.  There's something about the purity of a manual Dobsonian that appeals to me.  It's just me, a tube, a rocker box, and the sky.  Another common question is whether beginners should get the XT8 or the XT6.  Again, you won't go wrong with either, but I've been leaning towards the XT8 recently.  They've been slowly cheapening the XT6 over the years, deleting the eyepiece tray, navigation knob, and substituting the ubiquitous cheap plastic 1.25" focuser.  I don't mind losing the tray and the knob, but that plastic focuser bothers me.  The XT8 has a nice metal 2" Crayford-style focuser, and just based on that alone, I think the equation tilts towards the XT8.

The Orion XT8 is the Toyota Camry of telescopes.  This is good and it's bad.  It's not sexy.  But it's been doing a good job for so long, you tend not to notice it.  It's been fifteen-plus years, and my opinion has not changed.  If you're a beginner, this is the scope to get.  Even if you're not a beginner, these are incredibly useful to have around. 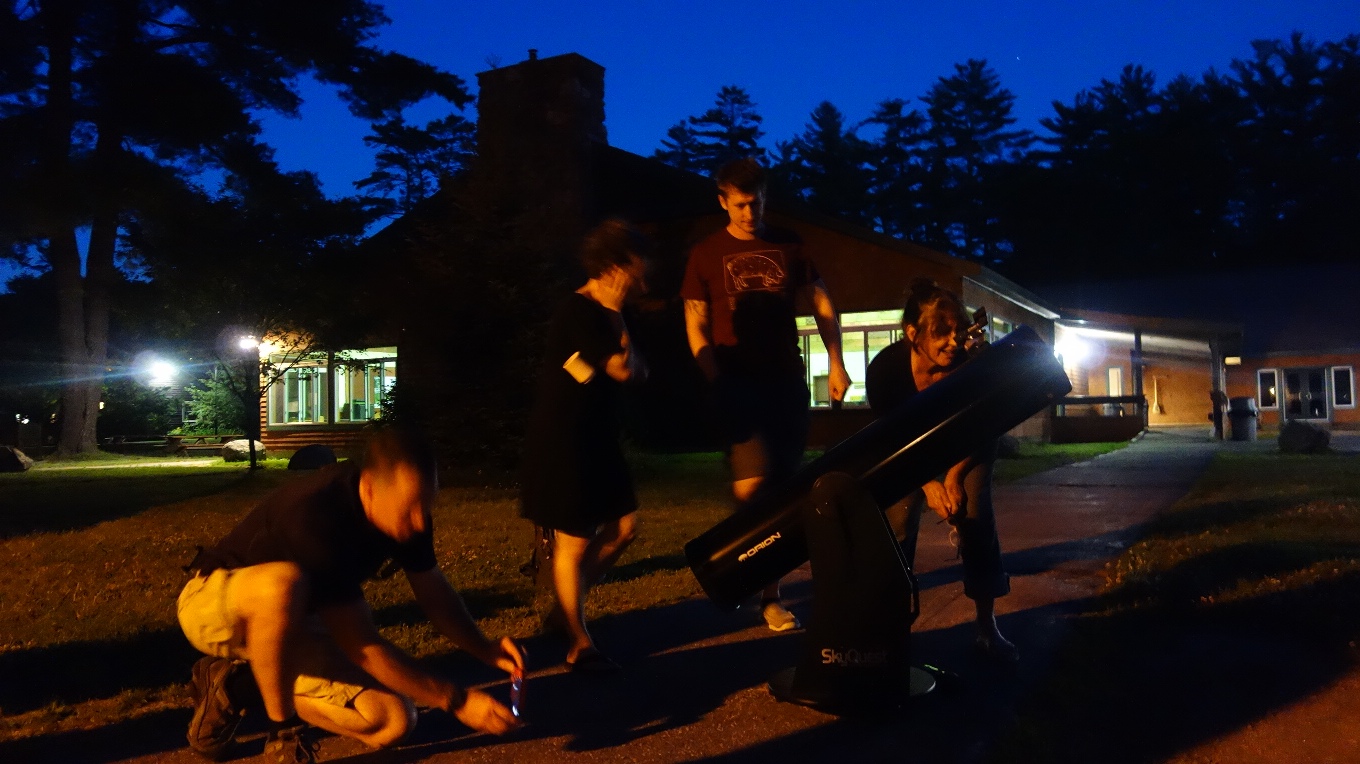 A crowd pleaser wherever it goes - the XT8

My friend Old Dan talks about the trends he's noticed at star parties.  A generation ago, everyone had (or wanted) a big Dobsonian.  Then it was all apos.  These days, everyone's into imaging.  This reflects my own journey as well.  Page back through the old reviews on this site and you'll notice the same rough trend happening.  I still appreciate a good refractor, but these days, if it can double as an imaging scope, that's a bonus.  Enter Astro-Tech's AT72ED, a high-quality affordable package.

Products from China have undergone a parallel journey.  A generation ago, when I started this site, Chinese products were a curiosity.  Again, look through the old reviews here and I would always point out - sometimes with disdain - when a product came from China.  After a few years, they became accepted, and today, we expect Chinese products to be good.  How good?  Twenty years ago, I paid $1000+ for a  TeleVue Pronto, a scope in the same class as this AT72.  And I did it more than once.  The AT72 has better color correction than the Pronto, comes with a hard case and (as of this writing) free shipping, and it costs $399.  I've paid more for eyepieces.  To be fair, the AT72 doesn't come with a diagonal or eyepiece (not to mention the signed manual from Al Nagler!) but you get the idea.

Think about it.  For $399, all you have to do is add your own eyepiece, diagonal, finder, and mount and you've got a first-rate observing/imaging system.  I didn't know what to expect when I ordered one from Astronomics this winter, but I was ready for anything.  If I didn't like it, I could always send it back.  I needn't have worried.  The only glitch I found was an outward dent on the scope's case, the result (I think) of the focuser's lock screw hitting the lid during shipping.  Whatever the cause, the scope's collimation is really good, and the star test is excellent, with only minor spherical aberration leaning towards undercorrection at 86X (if you don't know what that means, don't worry about it.)  There's remarkably little color for such a fast, cheap scope, and it shows up mostly under long-term imaging. 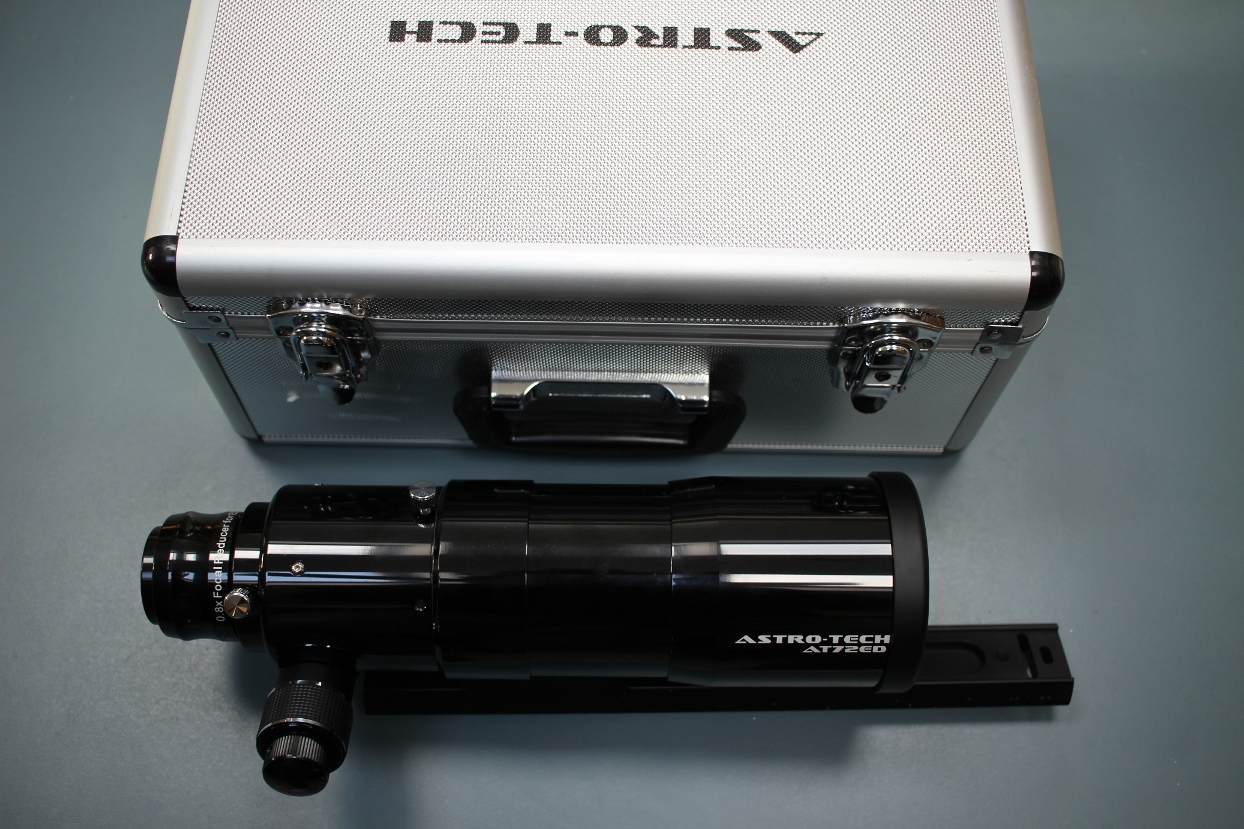 Manufacturers of small, fast refractors often state that you don't need a finder, but I always appreciate a finder no matter how short the focal length.  I've been using Rigel's Quickfinders for years and always have a bunch of them on hand for scopes like these.  The AT72 comes with a removable foot, drilled with 1/4" X 20 holes, spaced 35 mm apart.  While you can just drop the scope on your Vixen-compatible mount, the set screw will mar the nice finish on the foot.  Do the right thing.  Mount the foot an a separate plate and mar that instead.  Any mount from a CG-4 class unit and up will be just fine as the scope only weight about 5 lbs.  If you have a CG-5 or an AVX, you are in good shape.  If you're into alt-az, a Vixen Porta (or similar) holds scope just fine.

I inserted a 2" Orion diagonal, mounted the scope on my AVX, and looked at the late fall and early winter objects - the Pleiades, the Orion Nebula, M31, all of the clusters in and near Auriga, and M1.  I turned the scope towards M33, a notoriously difficult object due to its low surface brightness.  No problem here.  After only a few seconds, I found the galaxy with averted vision, and once I had the field "planted" in my mind, I could see it with direct vision.  Encouraged, I turned the scope towards the Veil Nebula, sinking in the west.  I was too lazy to dig out one of my light pollution filters and thought I'd give it a shot.  To my surprise, the thin, curved wisps (both halves) both revealed themselves in the 24 mm Panoptic.  Hmmm.  From my (increasingly light polluted) driveway, this is no small feat.  The only other time I've seen the Veil without a filter with such a small scope is when I had my second (and lamented) Takahashi FS60, a scope costing many times more than this humble AT72.

I've been doing a little imaging lately, and the AT72 is easy enough to use that even a ham-fisted imager like me can get results.  The tension on the scope's focuser is hard to set for a heavy load like my HuTech-modified EOS 5D Mk 3, and sometimes I wound up focusing my hand, which got a little clumsy.  Scope manufacturers seem to be trying to outdo themselves lately, with their big, serious-looking focusers.  Most of these serious-looking focusers seem to be Crayford-style units, which I've always found to be finicky.  Give me a well-made rack and pinion any time.  It's no coincidence that the beautiful and functional Feathertouch focusers, perhaps the best in the business today, are rack and pinion style.  Ditto for the simple and effective focusers from Takahashi.  Still, with that minor caveat in mind, I had little trouble getting this image of the Horsehead from my driveway. 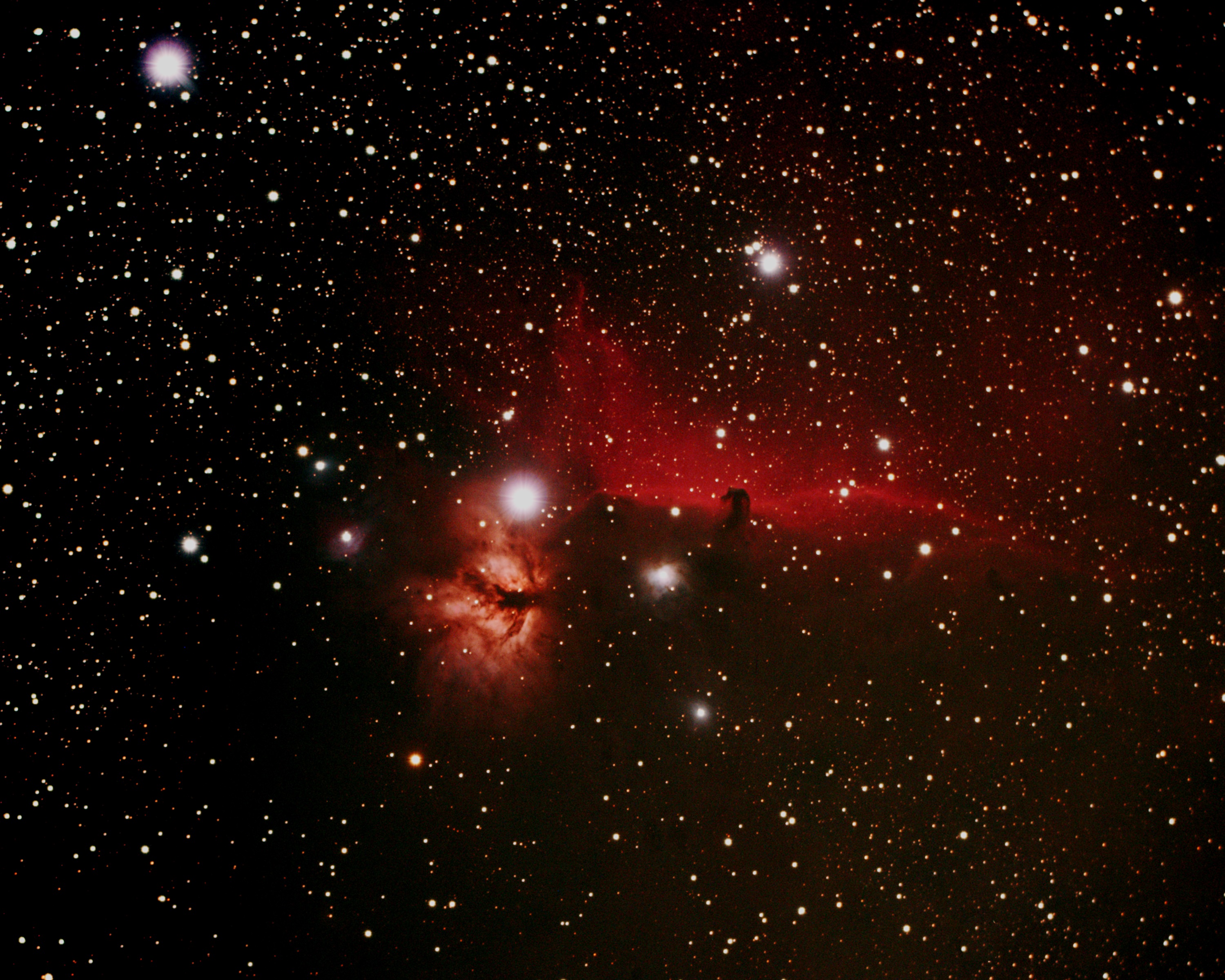 Limitations?  Other than the minor issue with the focuser, the scope is limited in light gathering. There's only so much you can see with a 72 mm refractor, and if you're a purely visual astronomer, your nights are going to tend towards the short side if this is your only scope.  With such a short focal length, you're going to have problems getting the power up for the planets and for close ups of the moon.  If you're just starting out, I still recommend you get something like the Orion XT8 (above.)  But for second scope, a travel scope, a scope where you can learn basic imaging, I have no hesitation in recommending this cute refractor to you.