Some telescope companies are known as much by their designers as by the scopes themselves.  Is it possible, for example, to mention TeleVue without thinking about Al Nagler?  Ditto for Dave Kriege and Obsession, Rick Singmaster and Starmaster, or Vic Maris and Stellarvue.  Perhaps no company, though, is so closely identified with its designer as Astro-Physics is with owner Roland Christen.  Even today, call them and it's possible, even likely, that Roland or his wife Marj will pick up the phone and talk to you.  Astro-Physics is the Mercedes-Benz of the telescope world.  Like Mercedes, their influence on the industry extends far beyond the small number of units they sell. 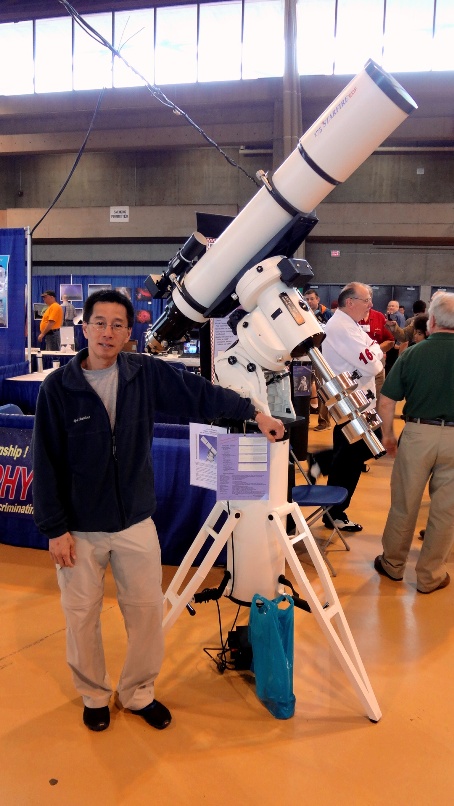 Stylish, elegant, and highly desirable...and the scope ain't bad either!

Enter the AP175, the latest Statement Product from Astro-Physics.  I like AP's Maksutov and Honders, but it's the refractors that have traditionally formed the core of the company.  As with all Astro-Physics telescopes, these are rare, limited production run models with a long waiting list (one club member recently just got his AP 130 after waiting nearly ten years for it.)  When AP announced the scope at NEAF, I knew I wanted one, but I couldn't afford one, nor did I have a mount strong enough to hold it.  Luckily, there are actually two of them in our local club, and I got the chance to spend some time with one of them.  The OTA comes in the familiar gray AP foam-lined case and weighs 43 lbs.  Although it is the largest refractor in the AP lineup, it will fit comfortably on an AP900-class mount, which is what we used.  In theory, a G11, CGEM, or Atlas will hold it.  AP has a nifty new right angle polar scope, which, combined with their iPhone app, actually makes polar alignment kind of fun (when was the last time you could say that?!) 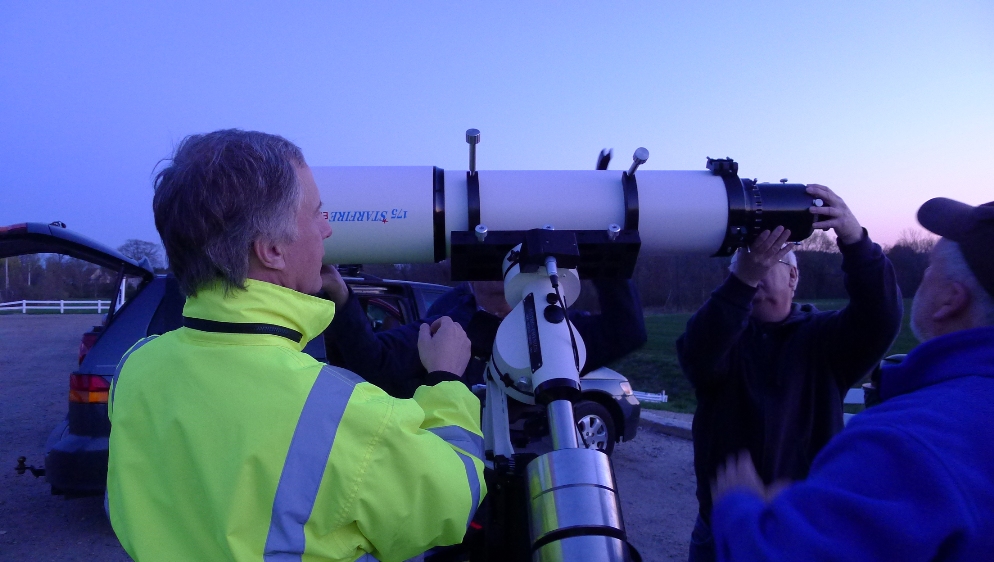 We ran a star test on Alkaid, in Ursa Major.  Using the 6 mm Zeiss ortho at 233X, the diffraction rings showed near textbook patterns inside and outside of focus.  There was no sign of false color or astigmatism.  This star test did generate some discussion though.  While excellent, the star test seemed to fall a hair short of perfection.  What's more, we couldn't agree on whether the optics were very slightly overcorrected, or very slightly undercorrected based on our textbook readings.  From reading Roland's writings on the topic, and from listening to him casually speaking to people at trade shows, this is deliberate.  If I may paraphrase Roland, on an apochromatic refractor, the various colors come very close to focus, but not exactly.  This minor discrepancy causes some interference with the diffraction patterns inside and outside of focus.  This will cause some confusion when reading a traditional star test.  In any case, this anomaly (if that's what it is) didn't seem to degrade the superb images the scope was producing, and I am in no position to debate Roland on this topic.  Also, for what it's worth, I have noticed similar anomalies on other fine refractors like Takahashis. 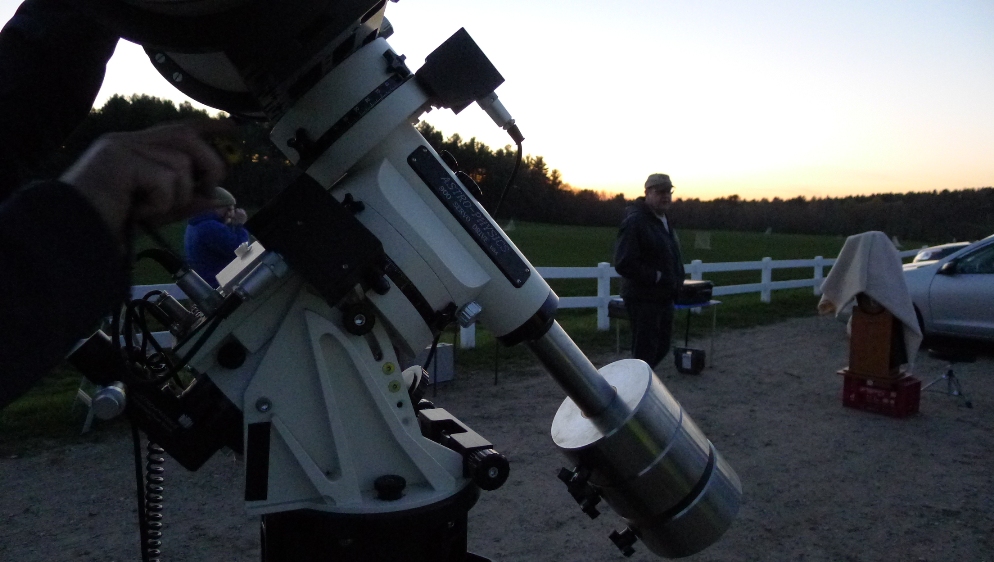 Mike T and Old Dan, who are the club's double star fanatics, came armed with a list of increasingly difficult doubles for the scope to split.  Castor at 108X with the 13 mm Ethos was no problem of course, and the view was so nice it was almost a shame to move on.  Eta Geminorium (3.15 to 3.9/8.8  1.4 arc second) is a tough double because of the large magnitude difference.  The scope split the pair with the 8 Ethos at 180X, but it was becoming obvious that the seeing conditions weren't going to allow us to go sub arc-second on this night.  Still we carried on.  Xi Ursa Major (4.4/4.8, 1.2 arc seconds) is a nice looking pair and looked good at 180X.  We moved on to the tighter Zeta Bootis (4.4/4.8, .8 arc seconds) and needed the 6 mm Zeiss Ortho to notch it.  By this point the seeing was making the stars move around a lot, and we called off the rest of the list.  Too bad - I was really looking forward to seeing what the scope could do with Zeta Cancri, or Zeta Herculis.  We also briefly cranked the power up on Sirius to try to split it, but it was so low in the sky that the star was dancing around and throwing up a kaleidoscope of interesting colors.  Iota Cancri made for a nice diversion, with its blue/orange components that could fool someone into thinking they were looking at Albireo. 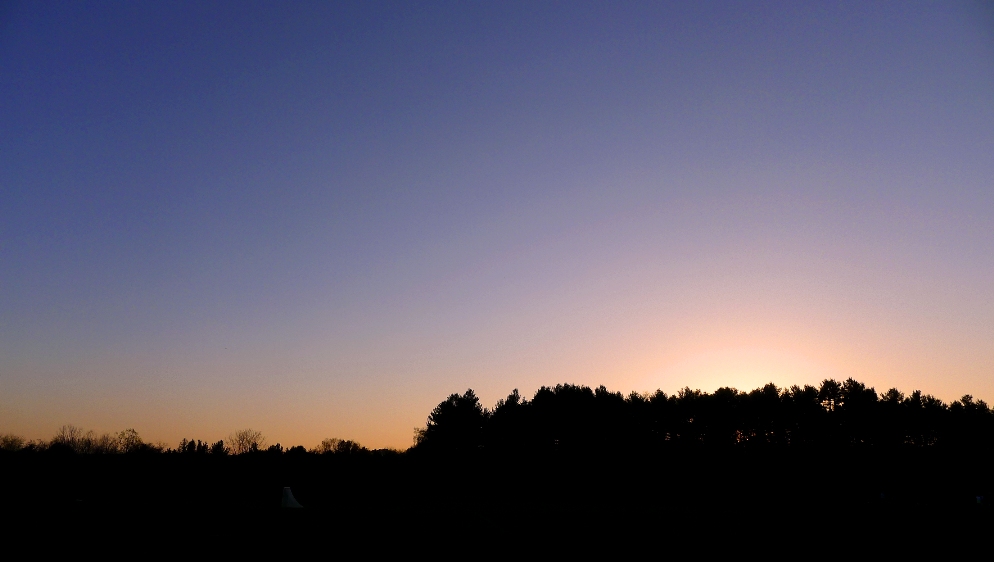 I couldn't resist taking some sunset photos of our nice observing location in Bedford, NH.

By this point, Saturn was rising in the east.  Despite being only 28 degrees above the horizon, the view was simply stunning with the 10 mm Ethos.  Every person who walked up to the eyepiece was stopped dead in their tracks.  The planet had that "reach out and touch it" palpability that I've only experienced rarely, and usually only with high end refractors.  John P couldn't resist bringing out his TeleVue binoviewer at this point.  Loaded with a pair of 13 mm Type 6 Naglers, Saturn looked almost three dimensional.  On this night, we saw Rhea, <Saturn>, Dione, Tethys, and Titan. 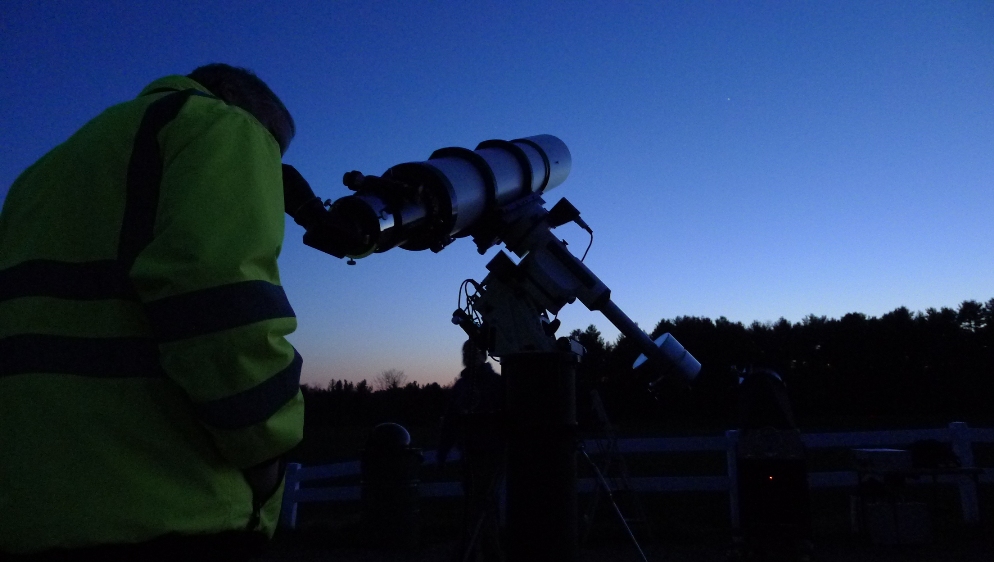 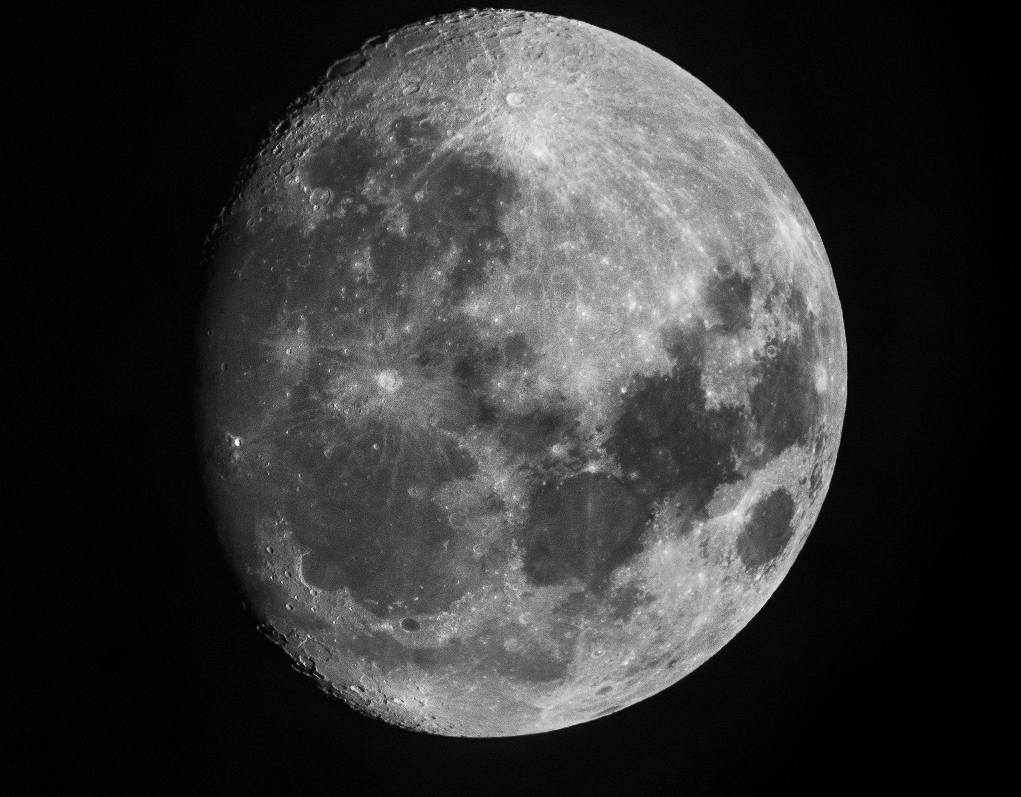 Image of the moon taken 4/22/13 through the AP175.  Scope owner David S held his Leica D-Lux 5 up to the eyepiece and snapped this image. 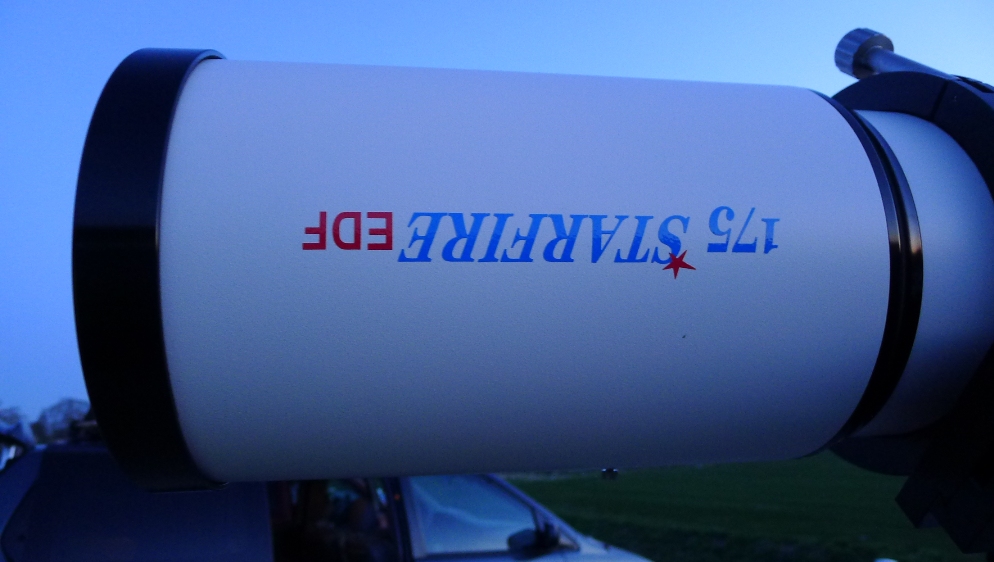 Whether the logo is right side up or not, this is a scope for the ages.

One thing that's hard to describe is how pleasing the scope is to look through, even when it wasn't pointed at anything in particular.  I found myself just staring at random star fields, taking in the view.  When you look through a good apo, your world suddenly gets very quiet.  Your breathing gets deep, and you don't seem to be in any hurry to do anything else.  It's hard to put a price on this, and it's part of the reason people love refractors so much.  I won't insult your intelligence by telling you the AP175 is recommended.  This is the best refractor I've ever looked through, and a good candidate for the best telescope I've ever seen, period.  Its only competitors for this crown come from AP's other, smaller refractors, and perhaps one of the larger Takahashis like the FCT150.  Do not miss the opportunity to look through one.

(Note: Keep watching this space, as I intend to add more observing reports.)