The world of the webcam planetary imager is a fickle one.  I still remember back in the early days when the world figured out to take videos instead of still images of the moon and planets.  People were ripping the cheap webcams off their computers and sleeving them down with cardboard tubes to fit into the drawtubes of their telescopes.  The rigs looked ridiculous, but the results were stunning.  Many of these early webcams were based on the Philips SPC-900, an inexpensive unit with a whopping 640 X 480 resolution.  It turned out the limited VGA resolution didn't matter, as Registax could throw away the blurry images in the video and stack the sharp ones.  Noise tends to be random, so the longer the video you were able to take, the more images you could stack, thus reducing the noise.

Early dedicated astro webcams like the Celestron NexImage were nothing more than repackaged SPC-900s with 1.25" drawtubes attached.  I still have two of the original NexImage units (operating at USB 1.1!) in my collection.  If you have an early webcam called a TouCam, it is likely the same model with different cosmetics.  Next came the USB 2.0 Imaging Source D*K series, and things began to get serious.  Soon you began seeing "blue boxes" everywhere.  At one point, I owned as many as five Imaging Source webcams - a combination of mono and one-shot color, in various chip sizes.  I bought so many of them in part because I was convinced these "blue boxes" represented the end of the line, as far as technology went.  I was wrong.  Within a few years, blue boxes began being replaced by "red discs," and the ZWO era (which I guess we are still in) began.  The ZWOASI series offered phenomenal performance at low prices, and as of this writing, my ZWOASI120MM and MC are still the workhorses in my collection.  Lately, in the past couple of years, Imaging Source has gotten back in the game with their Skyris series, sold by Celestron.  All of these are excellent.

Somewhere, in this history, between the "blue box" and "red disc" eras, several cameras from Point Grey - particularly the Flea and Chameleon, were (and in some minor circles, still are), popular with some planetary imagers.  Somehow, these Point Grey cameras escaped my attention, despite being used by several prominent planetary imagers.

A club member recently loaned me a Point Grey Chameleon CMLN-13S2M.  He handed it to me on the night of the Super Bowl in 2019.  While most of the people in the room were cheering for the Patriots to beat the Rams, I was anxious for the game to end.  It has been almost ten years since I first heard of theses cameras, and I was insanely curious to test it out.

Unlike the instantly recognizable Imaging Source or ZWO cameras, the CMLN looks like nothing much at all.  From a cosmetic standpoint, this is the plainest planetary imager I have ever seen; it looks like a smaller and lighter version of the NexImage.  Yet buried in this insignificant-looking package is a 1280X960 sensor.  Its specifications resemble my trusty ZWOASI120MM.  Although the CMLN is an older model at this point, they are still technically available, at around $375 retail.  This puts the unit far above the cost of the ZWOASI120MM, which lists for around $169 (I've seen used units selling for about $100.)  My version of the ZWO that you see below has been replaced by a smaller one, untested by me. 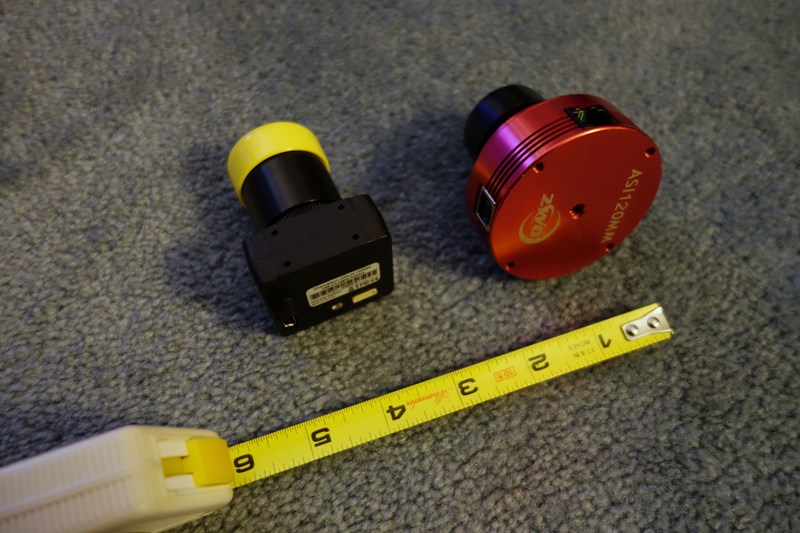 (Above) Chameleon on the left, ZWOASI120MM on the right.

I have gotten very adept at installing ZWO cameras.  Even if you don't have the driver CD, the necessary files are available on ZWO's web site.  I've brought new users up to speed on their PCs in less than fifteen minutes.  For capturing software, I use FireCapture and SharpCap.  My confidence with the ease of the ZWO installation makes me recommend them more than any other brand of planetary imager.

As it turns out, I got spoiled.  The owner of the camera did not have the included CD, so it was off to the Point Grey web site.  It took me almost a week to get this camera running.  Point Grey's web site is a confusing labyrinth of similar-sounding installation packages, and you have to register to get at the good stuff.  There is no link pointing you to where the driver downloads are, you just have to keep guessing.  I finally figured out that I needed to get "FlyCapture 2," a package that includes the drivers.  Even when I got everything installed, FireCapture refused to recognize the camera.  I kept getting this error message. 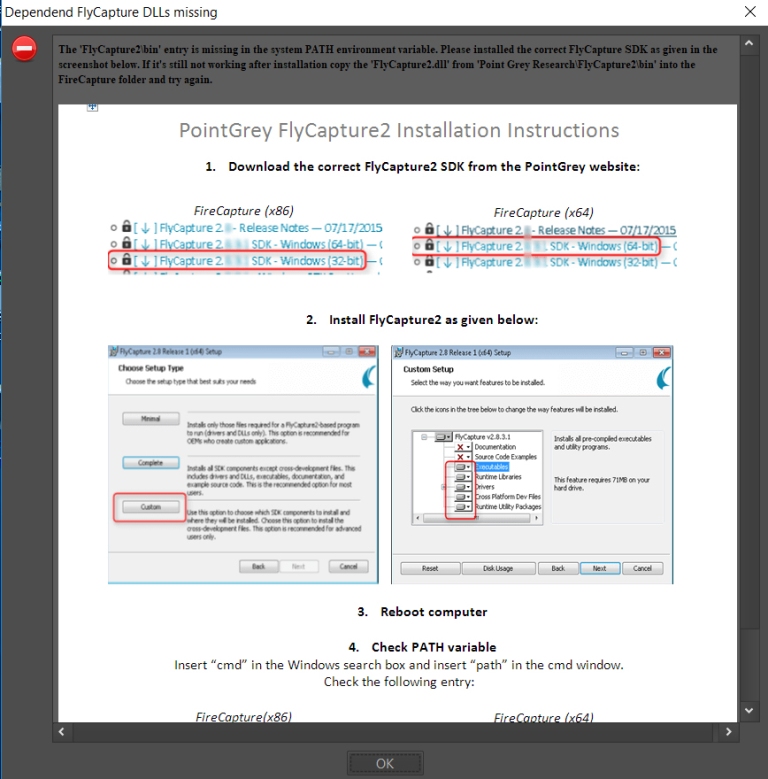 The fact that this message exists at all tells me that FireCapture is aware of issues with Point Grey cameras.  Despite following the instructions laid out above, I have (so far) been unable to run the camera on any of five PC laptops of varying vintages and operating systems, using several different versions of FireCapture.  I have uninstalled and reinstalled FlyCapture 2 several times to no avail.  Point Grey says you only need the lighter "FlyCapture Reader" to use the camera, but that didn't work either.  Look at the screen shot above and it strongly implies you need the whole package.   If anyone reading this has any hints, please let me know.

Of the five laptops I tried, I did get all of them to recognize the camera in SharpCap, as long as I used version 3.2, and not any earlier version.  So all of the images you see below were captured with SharpCap.

After nearly a week, I had the camera running on my 2017-era Acer i5 laptop, which proved to be the most stable of the three computers that would recognize the camera. 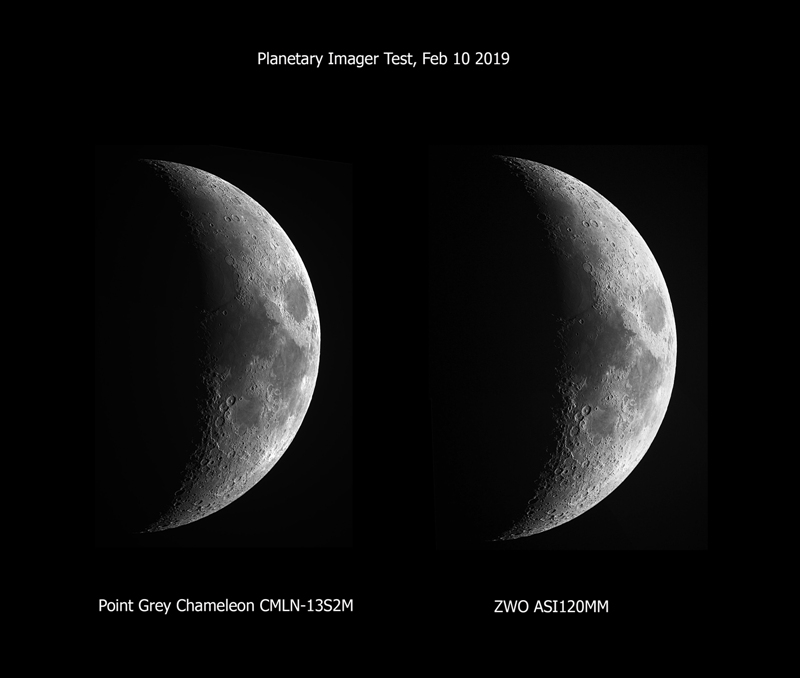 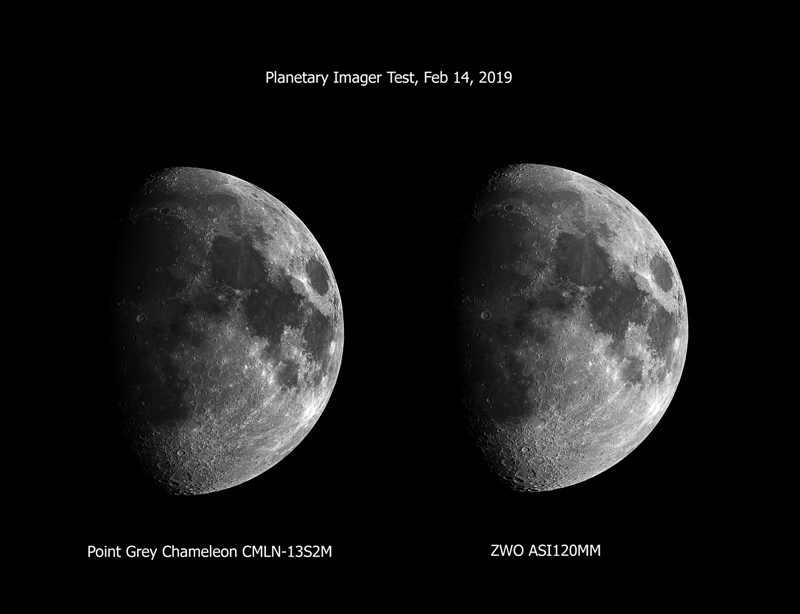 Despite having similar specs to the ASI, the images have slightly more contrast, more "there-ness."  I showed these images with and without the captions to several people, astronomers and laypeople alike, and almost everyone picked the Chameleon.  It's subtle, but the world of the planetary imager is built on subtleties; a little means a lot.  The Chameleon uses a Sony IX445 chip, while the ZWO uses an AR0130CS chip.  The differences in the electronics may make a difference as well.  Keep in mind, the Chameleon costs two to three times as much as the ZWOASI120MM. 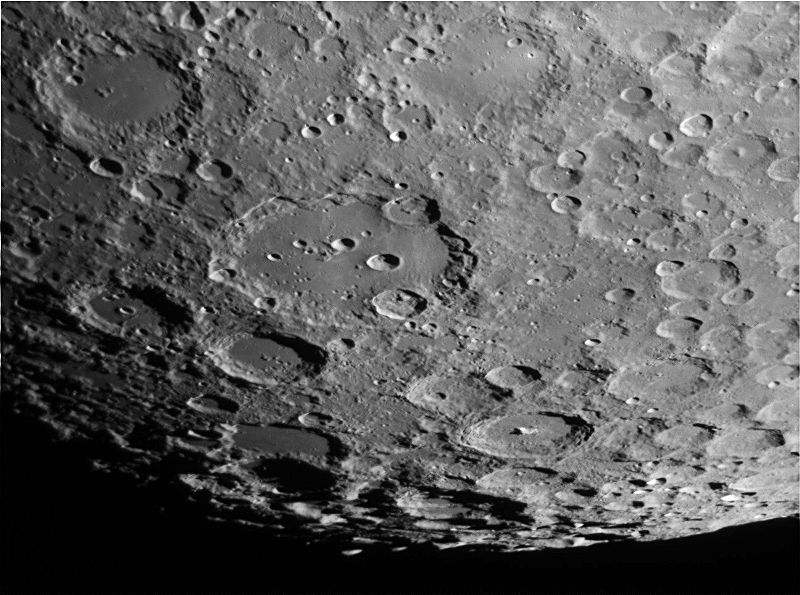 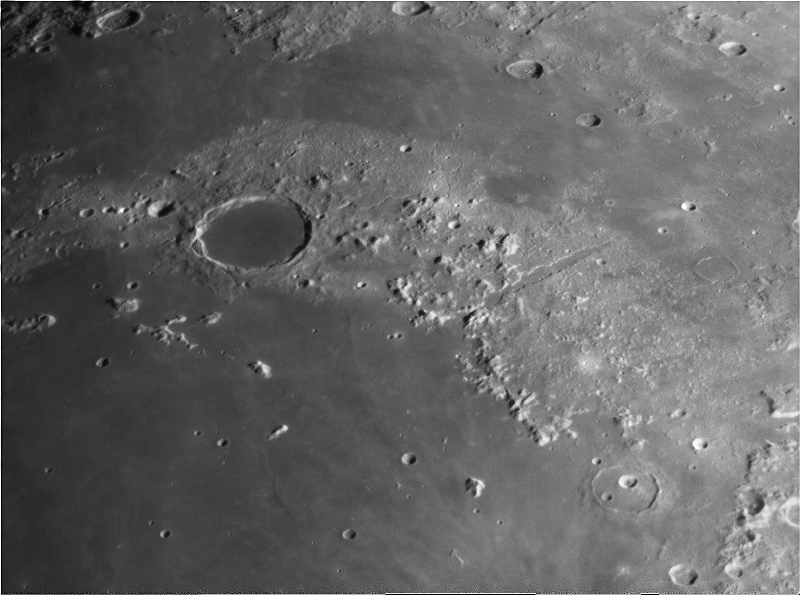 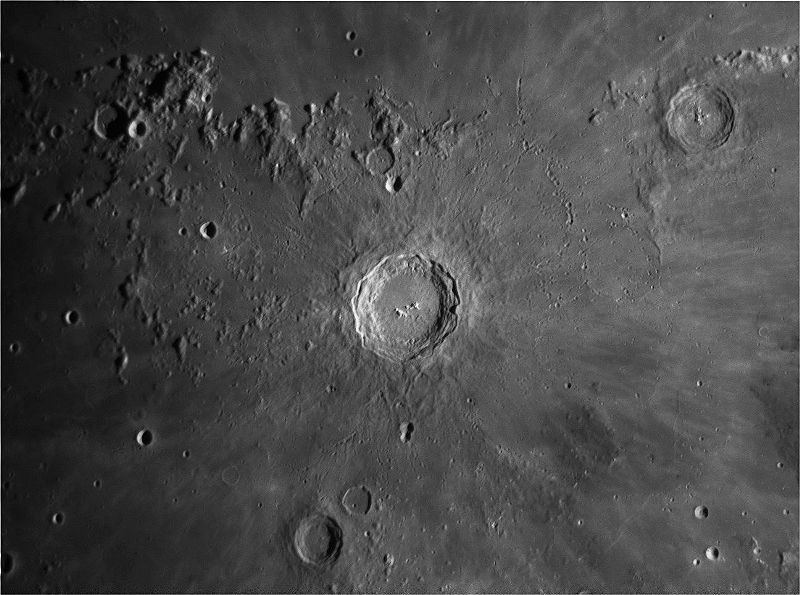 Should you get one?  If you can deal with the potential installation issues and don't mind paying more, I would say go for it.  I plan to use this one a lot, at least until the owner asks for it back.  On the other hand, a new or used ZWOASI120MM is so cheap and so useful, I think everyone reading this should get one, even if they have few plans to do imaging.  Whatever you buy, the newest generation of these webcam imagers are so good, it's hard to go wrong.  It's an exciting time to be involved with this activity, and I look forward to what happens next!