Many of you have been kind enough to write in during the past nine months asking after my well-being.  Thank you to all of you who care about me, and about what appears on this site.  In case you were not aware, I did a bit of a "life dropout" starting in Jan of 2019.  I got into a Master's program at Dartmouth.  The program is titled Master of Arts in Liberal Studies, but once you fulfill certain minimum requirements, they pretty much allow you to do what you want, as long as you can justify it as contributing to society or the general knowledge base.  I went in intending to write about my concern for certain aspects of Asian-American culture, and the pressure that parents place on their children to succeed, academically and professionally, at whatever cost.  In other words, I am not sure that the Tiger Mom phenomenon is a good thing, and may actually be damaging to the psychological well-being of an entire generation.

But life, as John Lennon pointed out, is what happens to you while you're making other plans.  Being immersed in a first-rate institution among a lot of smart people, I immediately became interested in other things.  I took two med school classes.  I indulged a lifelong interest in classical music conducting.  And yes, I wound doing some astronomy too.  What follows is a summary of my experiences at the school.

I am not a young man.  I was determined to enjoy the process, to embrace failure, and to have a great experience.  I carried a camera with me at all times.  The following mosaic shows the changes of the seasons during the first year.  Every student at Dartmouth sees this view several times each day.  Every day yields little micro changes, that over time, add up to big changes. 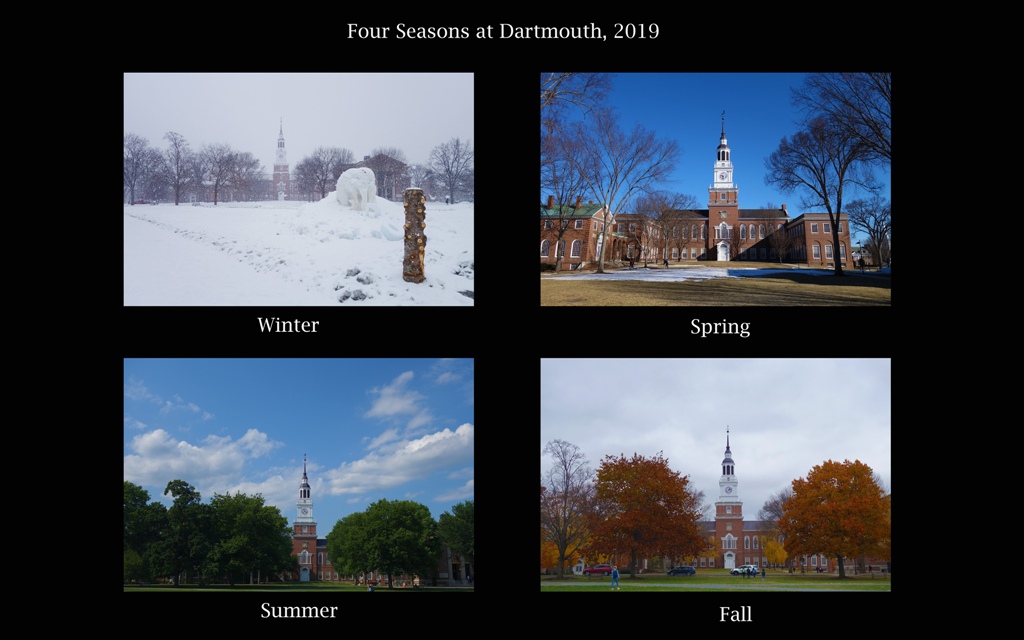 My interest in classical music goes back to childhood.  I have always been fascinated by conductors.  Why, for example, will the same orchestra, playing the same music, sound so different under different conductors?  The power, charisma, and knowledge of the conductor makes a big difference.  The class was taught by the conductor of the Dartmouth Symphony.  This guy may be the toughest professor I have ever faced.  You show up unprepared at your peril.  The man does not suffer fools easily.  He will dismiss you from the podium if he feels you are inadequate, leaving you to make the "walk of shame" back to the audience.  In reality this walk takes perhaps twenty seconds at most, but while it's happening to you, it feels like you are walking for about eight years.  All of us have walked out of class trembling from this "feedback."

After the first week, half the class dropped out.  I was determined to stick it out, as this has been a lifelong dream of mine.  Unfortunately for me, I found myself stuck in class with some true musical geniuses, including a couple of remarkable young guys from Beijing.  Both of them are piano competition winners, and their talent and level of preparedness were astonishing.  I quickly found myself playing catch-up.

No amount of study, preparation, or experience in public speaking (I have quite a bit of the latter) will prepare you for the terrifying feeling of ascending the podium and having a group of professional musicians staring up at you.  Who am I to tell them what to do?  How can I possibly lead these people?  But lead them you must.  You set your score on the music stand, open it to the first page, raise your baton, give the preparatory downbeat, and hope something resembling music comes out of the orchestra.

The orchestra, reduced to chamber proportions, with pianists filling in roles of the minor musicians

We learned real fast that the worst thing we could hear from the professor was, "What you doing?!"  (He is Italian.)  "What you doing" is a euphemism for "You F***** Up."  And F up I did, over and over again, as dissonant mishmash came out of the orchestra's inability to follow my confusing directions.  If you F up too many times, he will tell you, "Get off my podium."  This felt unnecessarily harsh, but keep in mind it is a very expensive proposition to bring in a group of professional musicians on your behalf.  If you don't know what you're doing, the class must move on.  There was one class period where I conducted for a grand total of less than two minutes.  I felt worthless and ashamed.  It didn't help that the guy who went after me conducted brilliantly.

I finally pulled it together one Tuesday morning.  We were instructed to prepare the first movement of Beethoven's 5th Symphony, a deceptively simple work famous for tripping up conductors.  The worst part is the piece is so well-known, if you F up, everyone will know about it, and everyone will blame you.  The professor was not in a good mood that morning, dismissing one student after another.  I was last.  Actually, I had been hoping there wasn't enough time and he would end class early.  But he called me up to the podium.  I had spent every waking moment over the weekend studying this work.  I had listened to at least a dozen recordings and YouTube videos, and kept a copy of the score next to my bed.

What followed I consider the highlight of my time at Dartmouth.  I made it through the entire movement.  He didn't stop me once.  At the end of the pianists smiled and gave me the thumbs up.  Afterwards the professor stopped me in the halls.  "Your progress has been satisfactory."

Many people have the wrong assumptions about conductors.  They believe the conductor must whip up a storm during the fast sections, and take it easy during the slow ones.  The truth is closer to the opposite.  During the fast parts, no one has time to look up at you.  Keep your motions simple and try not to screw anyone up.  But the slow movements are where the musicians need you most.  They have time to look up, and they need you to direct traffic and cue entrances.  Another truth is that, 80% of the time, the orchestra is not even looking at you.  They are too busy.  But this does not absolve you of responsibility.  20% of them are still watching you, and it is not the same 20% all the time.

Our final exam was two weeks long.  The professor wanted to get a good look at us before assigning our grades.  I conducted Mozart's 29th Symphony.  The intensity was unreal, both during class, and away from it.  Relaxing at home was worse; every spare moment spent not studying the score resulted in terrible self-induced guilt.  Even today, almost a year later, I still know the trouble spots in the score.

That's the professor on the right.  Check out the judgmental way he's looking at me.  Amusing to look at today, but terrifying while it's happening to you.

I introduced myself to the astronomy department within days of getting on campus.  They seemed like a nice bunch of guys, and even gave me the keys to the three observatories.  They contained four Meade 12" SCTs and a C14.  There is also a vintage refractor in its own dome that is a good candidate for restoration. 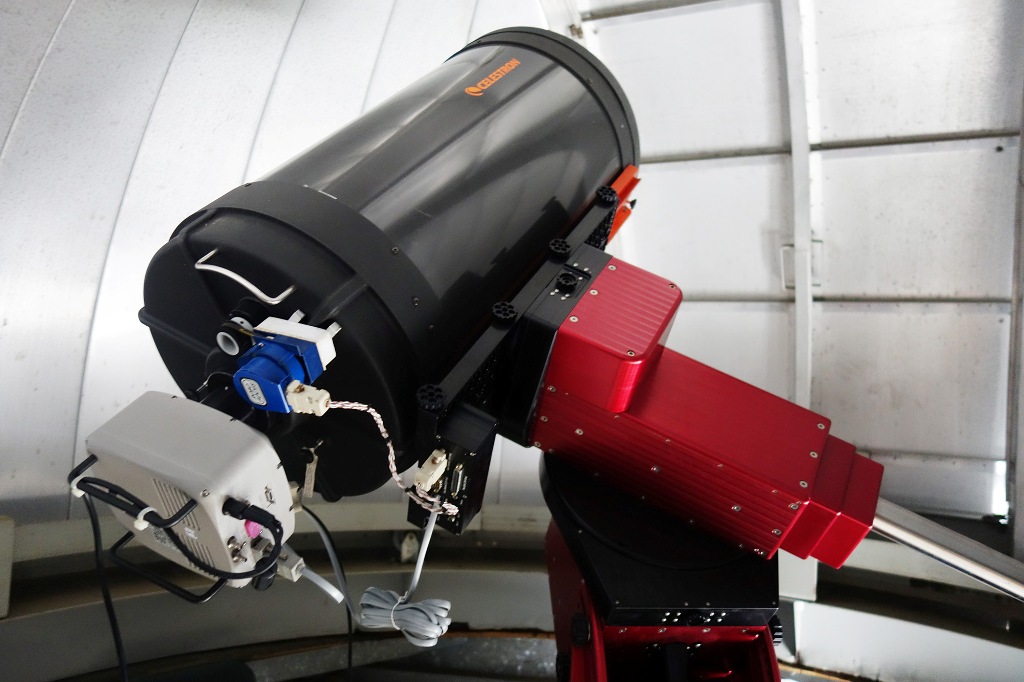 The C14 in one of the rooftop observatories. 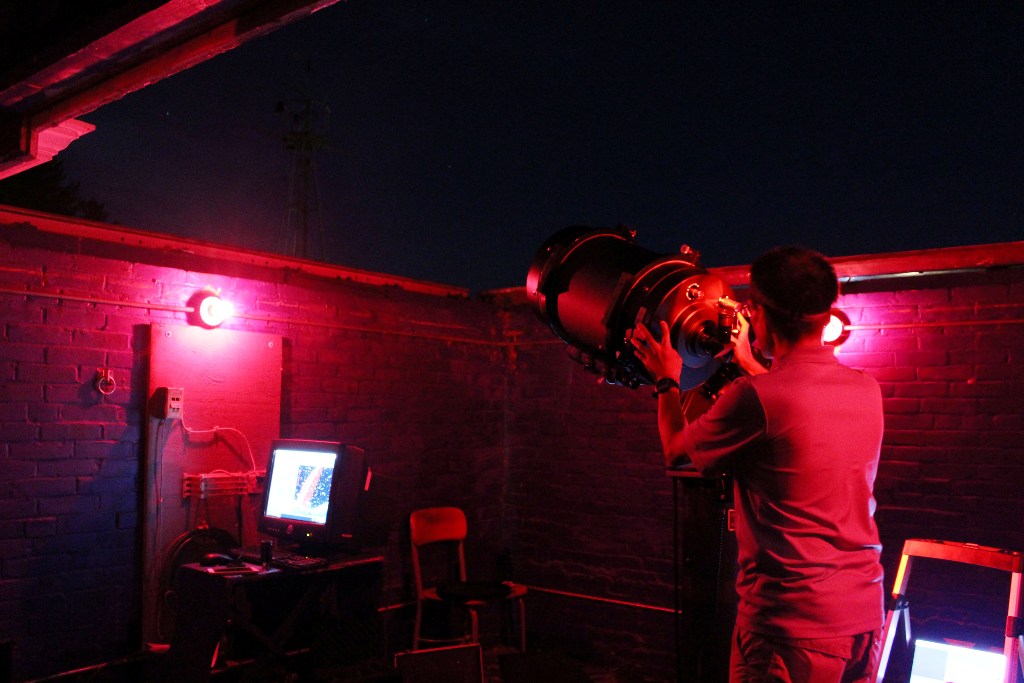 Doing planetary imaging through one of the Meades. 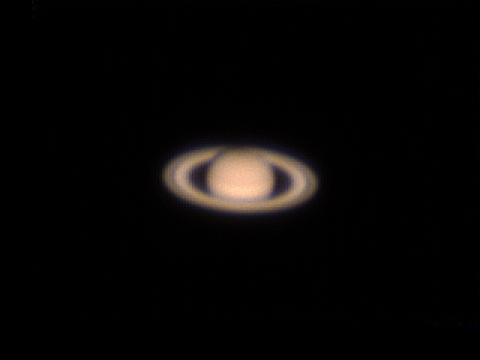 A passable image of Saturn in August of 2019 through the telescope above.

One interesting thing happened to me in the summer.  The graduate school was in the process of changing its logo.  The picture shows the Baker Tower at the center of campus with Cassiopeia at the right.

Someone knew someone who knew me and asked me to take the official photo.  This was not as easy as you might think.  The building and the astrophoto would have to be taken separately, and then merged in Photoshop.  First up was the Baker Tower itself.  I spent several evenings taking these shots at various times of the night from a number of spots around the lawn.  I used a Canon 6D and a 70-200mm f/4 lens.  I settled on this image: 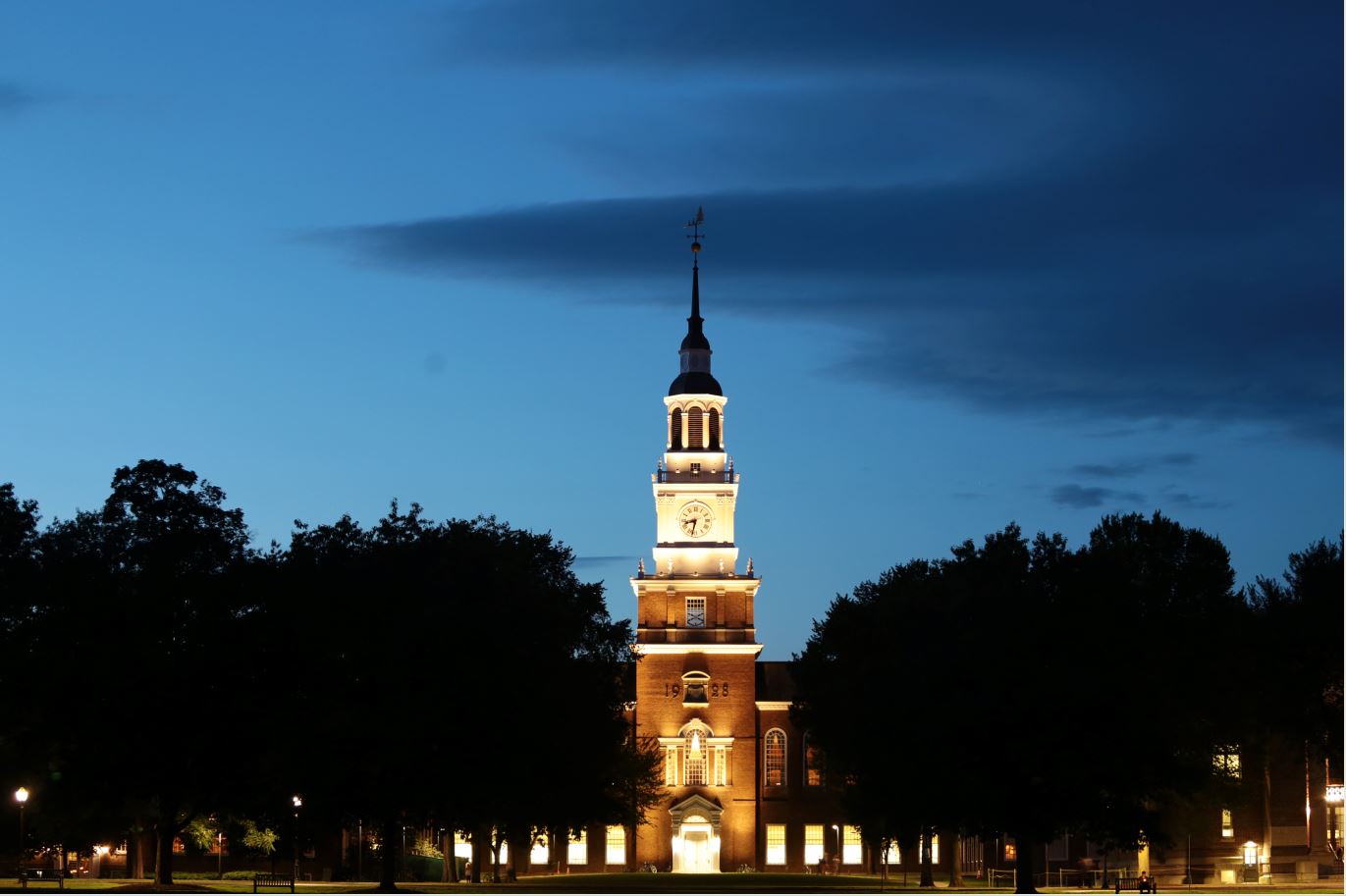 I found the light at dusk was slightly better than in full darkness.  Then there were several nights where I got up after midnight (it was August, remember) to catch Cassiopeia from a hilltop away from these lights. 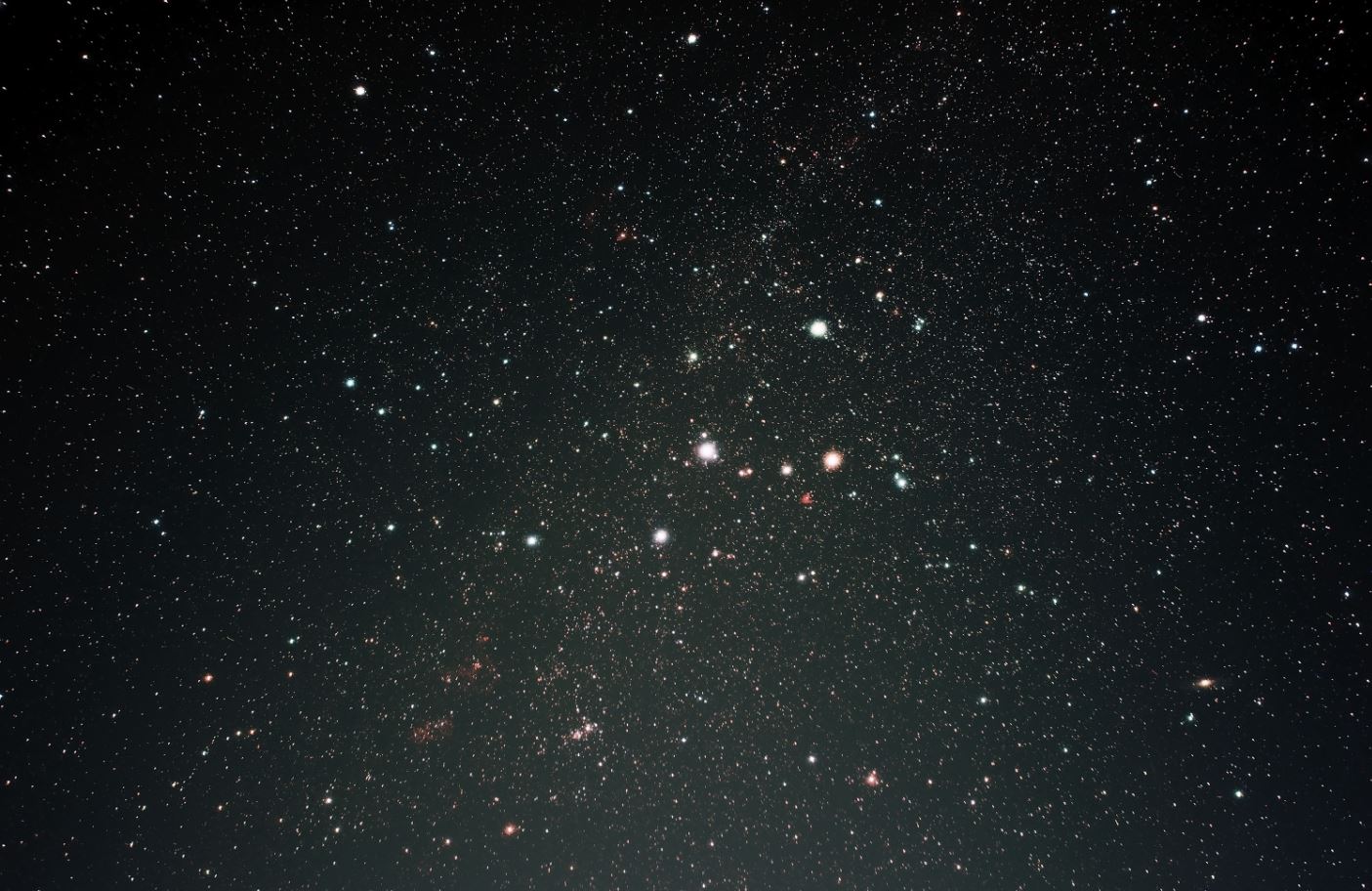 Merging the images was more of a challenge than I expected.  It took days to get this right. 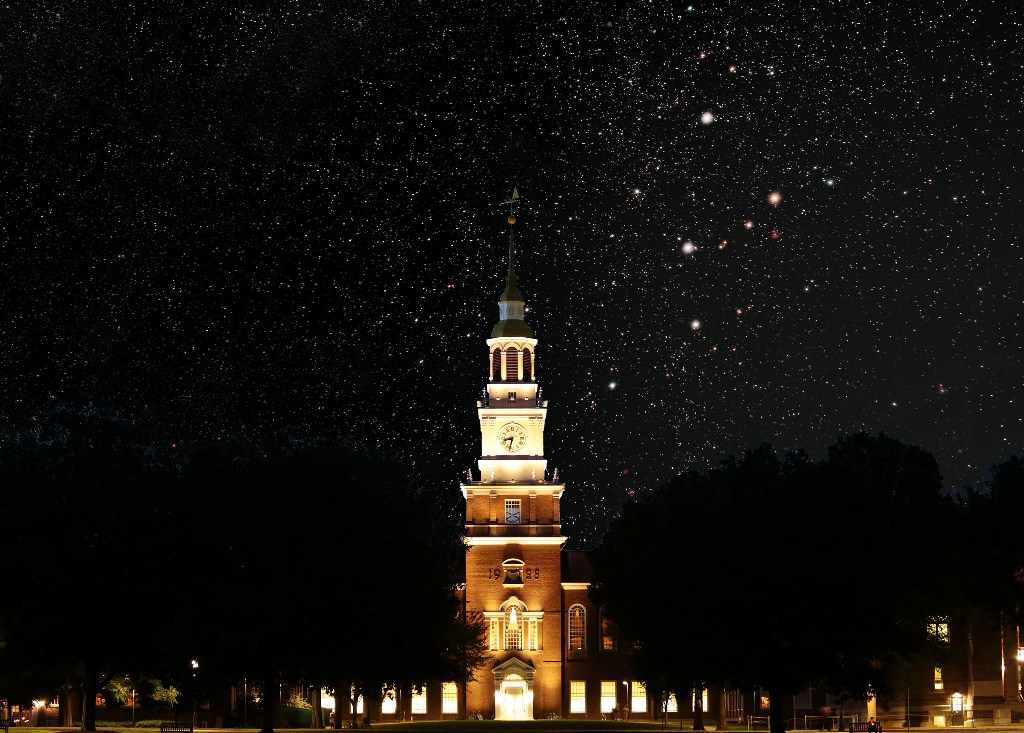 It isn't realistic, but the weren't going for realism, and I think the image really pops off the page.  So now, if you go to the Dartmouth Guarini Graduate School web page, you will see the image. 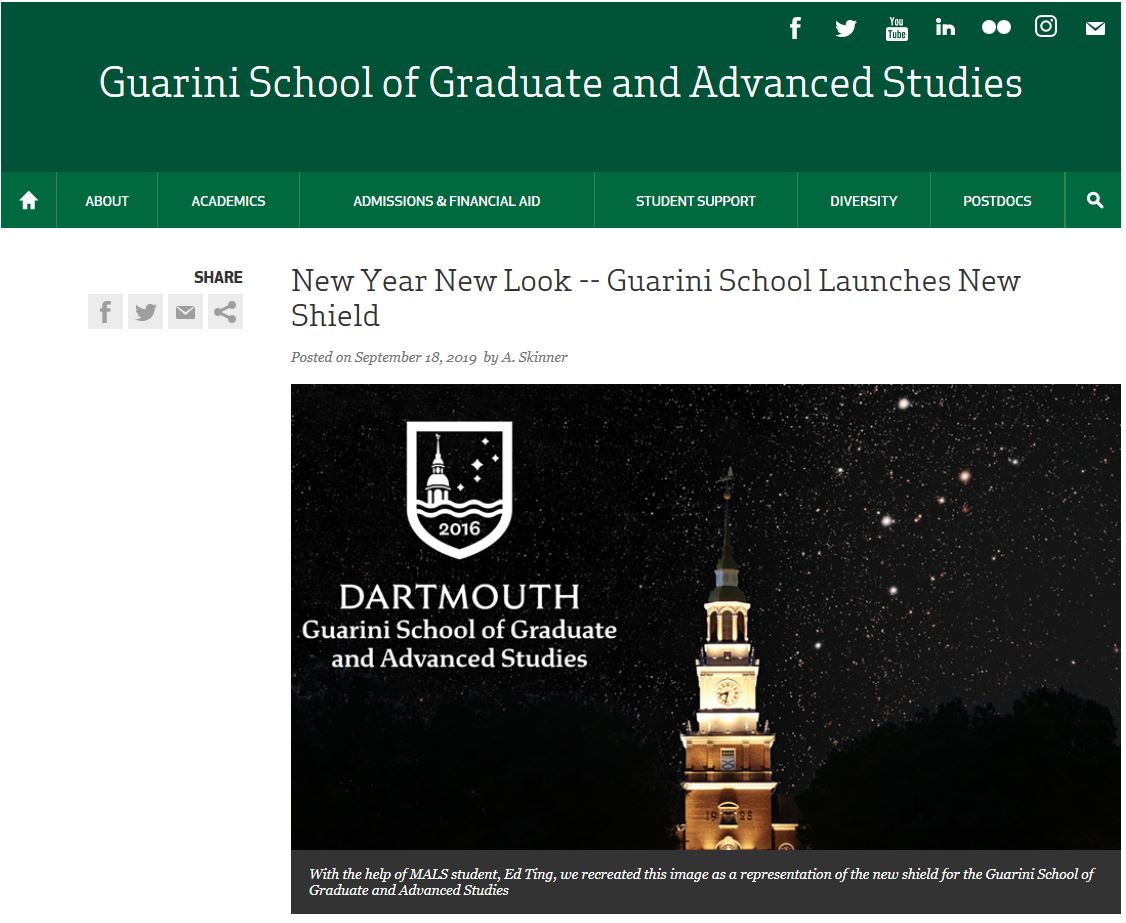 I wound up doing my thesis on astrophotography - its history, importance, and practical lessons on nightscapes, planetary, and deep sky imaging.  Some of you have asked to see it, but I'm going to hang on to it for a little while to let it sit in my brain to make sure it wears well over time.  I'm proud of the work that I did, and am pleased that Dartmouth allowed me to pursue my passion.  But it still leaves the Asian-American topic unanswered for me.  Do I let that go, or do I pursue it through another venue?  Time will tell.

There is so much more.  We had an opiod addict tell his story of addiction and recovery, to tears in the audience, in med school.  I took a journalism class taught by the former foreign correspondent of the New York Times.  Just hearing him tell stories - from Cairo, Bejing, Bosnia, Vietnam, and other places - was beyond fascinating.  And there were the people I met, students and teachers alike, whose friendship I will carry forth with me.

Who knows what the future will bring?  Onwards!