These days we tend to associate the word "Tasco" with junk, but earlier Tascos from the 1960s, 1970s, and even a few models from the1980s, were decent.  Some of them were, and are, more than that.  Collectors have started realizing this and prices on the used market have gone up accordingly.  Of particular interest to collectors are the equatorially-mounted refractors from the 1960s.  Tasco's model numbering system takes some used to getting used to, and doesn't make a lot of sense, but in general, the larger the number, the larger the scope.  Thus, the models range from the hand-held spyglass #1, to the massive #20TE 4" f/15 equatorial refractor.  Models at these extremes are rare, however, and most collectors will find themselves concentrating on a few models in the center of the line.  These are:

If you're planning on actually using the scope, the #7TE or #7TE-5 are the minimum model you should consider buying.  Their (uncoated) optics are quite good (see images below) and their long focal ratios almost eliminates false color.  The star tests on these are usually very good to excellent.  If you have the stylized circle stamp on the right side of the focuser nameplate, it's a Royal Astro lens from Japan, and considered very desirable.  Selling for $149.95 in 1967, the #7TE is the Tasco you find at garage sales and in attics all across the country.  If you want one, be patient.  One will turn up eventually.  Seeing it in person is preferable to buying one over the internet. 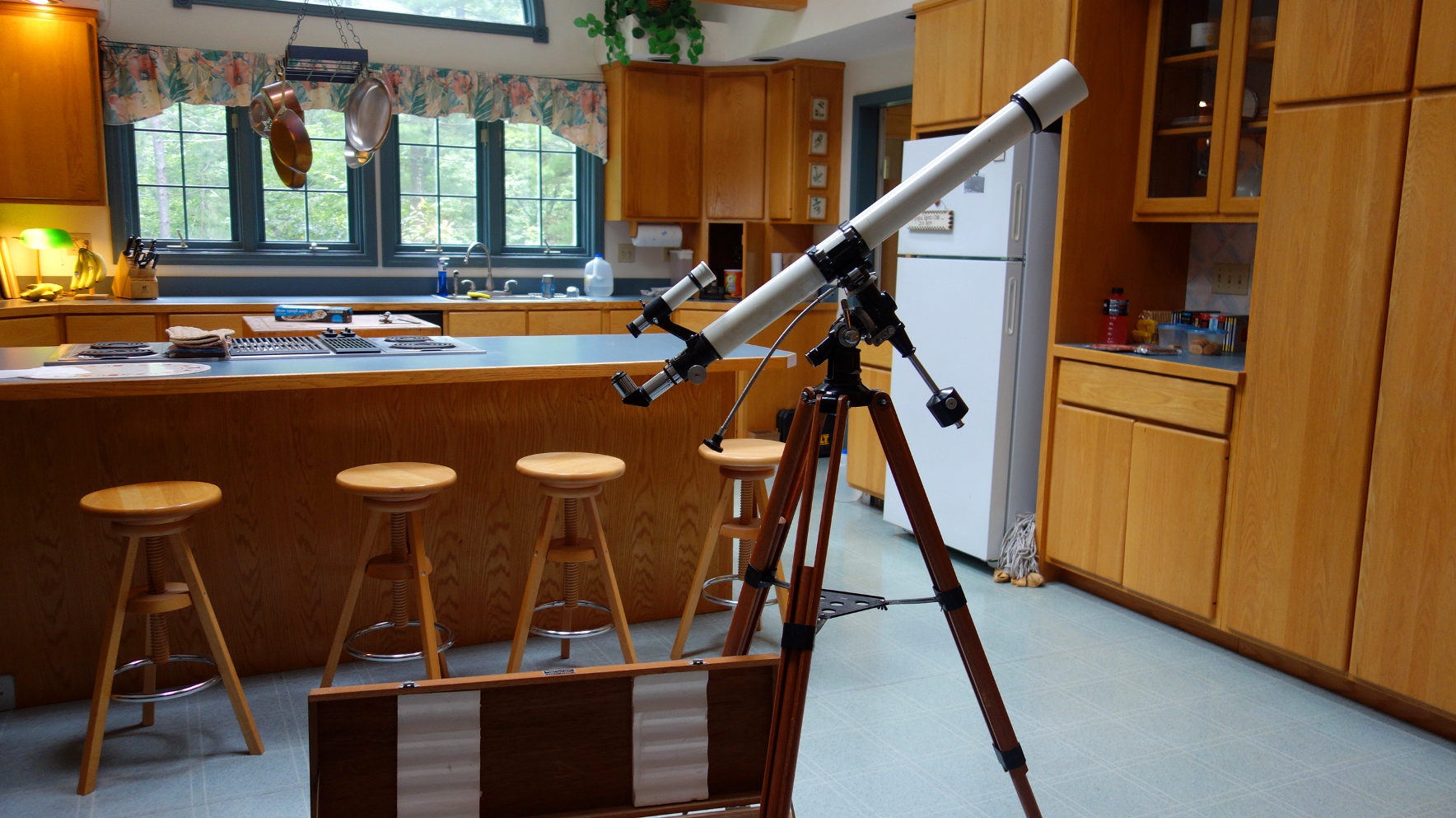 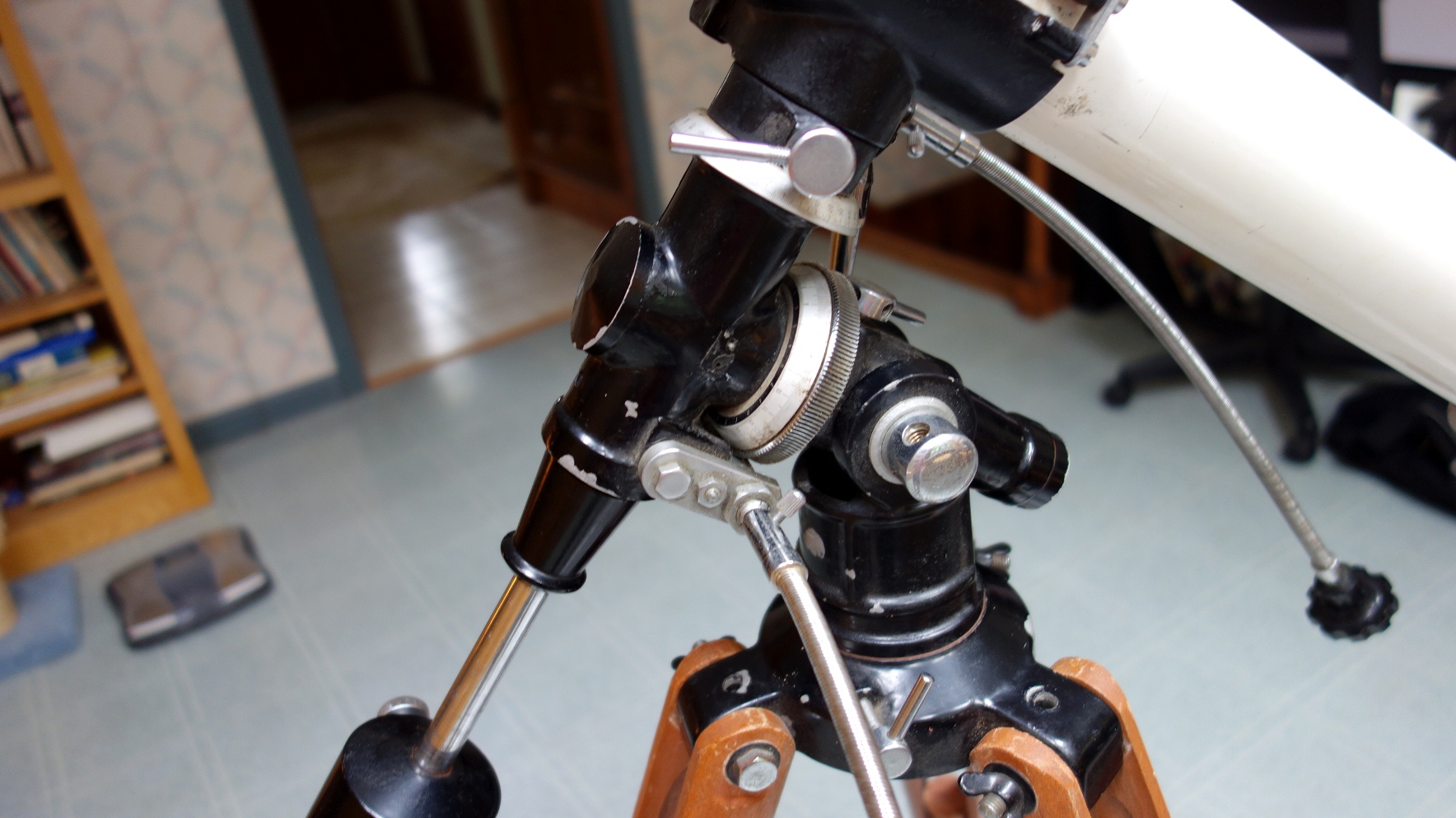 Close up of the equatorial mount 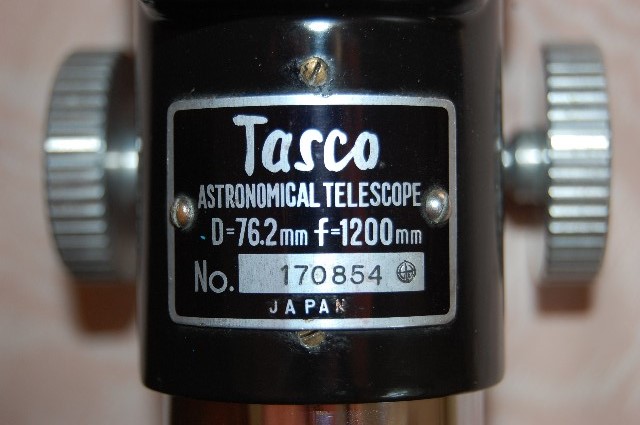 Focuser label from a #10TE.  Note the circular mark to the right of the serial number, indicating a Royal Astro lens

When you get there, take the time to put it together.  Make sure everything is there; spare parts are very hard to find.  If it's your first time, you may be surprised at how much assembly you have to do.  Everything comes apart.  The lens cell and the focuser, for example, are separate parts and need to be attached.  Vintage Tascos with missing pieces are almost a cliche.  Make sure you have both lens caps.  The little white metal lens cap for the finder seems to go missing a lot.  It's a big plus if you have it.  Inspect the case.  Is the styrofoam in good shape?  If it isn't obvious where all the parts go, the styrofoam is not in good shape.  How does the veneer on the outside look?  Restoration can be time-consuming and expensive, and these cases were often knocked around a lot.  Put the mount together.  Make sure you have all the hardware, and that the counterweight shaft isn't cross-threaded.  Do the axes move smoothly?

Cloudy lenses and eyepieces are almost unavoidable at this stage.  They don't necessarily wipe out the value of the scope, but less is better.  Cracked lenses are another story, although cracks -even large ones- have less impact on the quality of the image than you might think.  Make sure the lens cell isn't cross-threaded.  At the other end, make sure the focuser racks in and out smoothly with no rough spots.  Slide the drawtube all the way in and out (it has a lot of travel, to accommodate all the accessories like the barlow and the erecting prism.)  Some rare models have a 1.25" drawtube.  I am very fortunate to have one of these.  If you have one, check out the diagonal.  It's actually a .965" unit with a bigger case around it.  If you have the standard .965" drawtube, you'll have to get a hybrid diagonal.

I went observing with my 60 mm #7TE-5 over the course of a few weeks in the late summer of 2014.  We've had an unusually cool summer season, with temperatures dropping into the high 40s on some nights.  This kept the bugs at bay, so we did more than our usual amount of observing during this time.  The scope has a great star test, with almost no false color.  It's sharp on the moon.  It felt great to put my modern TeleVue 1.25" diagonal in it.  Cassini's division on Saturn came through easily at 166X with a 6 mm TMB eyepiece and Titan is not a problem.  Mizar and Alcor are not a problem.  I could not split Epsilon Lyra, however.

Deep sky was rough.  While I found M13 and M27, they weren't prominent in the eyepiece, and I've seen better views of M11 and M57.  The combination of the limited aperture and the aged, uncoated optics yielded less than sharp contrast.  M31 is easy, but at 1000 mm focal length, it's hard to get far away from it to appreciate its size.  I took some lunar images (see below) and was surprised at how well they came out.  Keep in mind, this is a not a tracking mount, so I had to capture limited samples, and quickly.

The mount caused some problems.  Despite going through and tightening everything I could find, it's still wobbly.  I didn't like the springy slo-mo cables.  When you release them, they bounce around, and the optical tube swings in rhythm.  Unfortunately, 60 mm rings are not exactly common these days.  I have a friend making a custom set for me and I plan to remount the scope on my CG-4 or CG-5.

Moving to the 3" #10TE opened up the skies.  The sunglasses came off.  Even with the .965" drawtube and a modern hybrid diagonal, I didn't notice any light cutoff.  Its star test is also excellent.  It's still surprising to me after all this time, how much "more" telescope a 3" is, compared to a 2.4."  Epsilon Lyra was an easy split, and all the deep sky objects that were so unsatisfying in the 60 mm scope suddenly came into clear view.  Luckily, the optical tube fits perfectly in a set of 3" Orion rings, which I mounted on a Vixen plate.  On the CG-5, the views of Saturn were fantastic.  This is a scope you could bring to your local skywatch with no excuses.

Prices are all over the place.  For a #7TE, expect to pay less than $100 for a clunker, up to several hundred dollars for a clean sample.  Note that there is nothing wrong with buying a clunker if all (or even most) of the parts are there.  At the very least, you could set it up as a display piece in your living room.  The smaller scopes, spotting scopes, and spyglass scopes are still reasonable today.  Prices have been rising for clean #10TEs and #15TEs.  I've seen asking prices of near $1000 for them.  And the beautiful 4" #20TE?  It's considered the equivalent of the 4" #166 Unitron, which can sell for upwards of $6000 today.  If you have the money and the ceiling height (these scopes can reach upwards of nine feet) go for it. 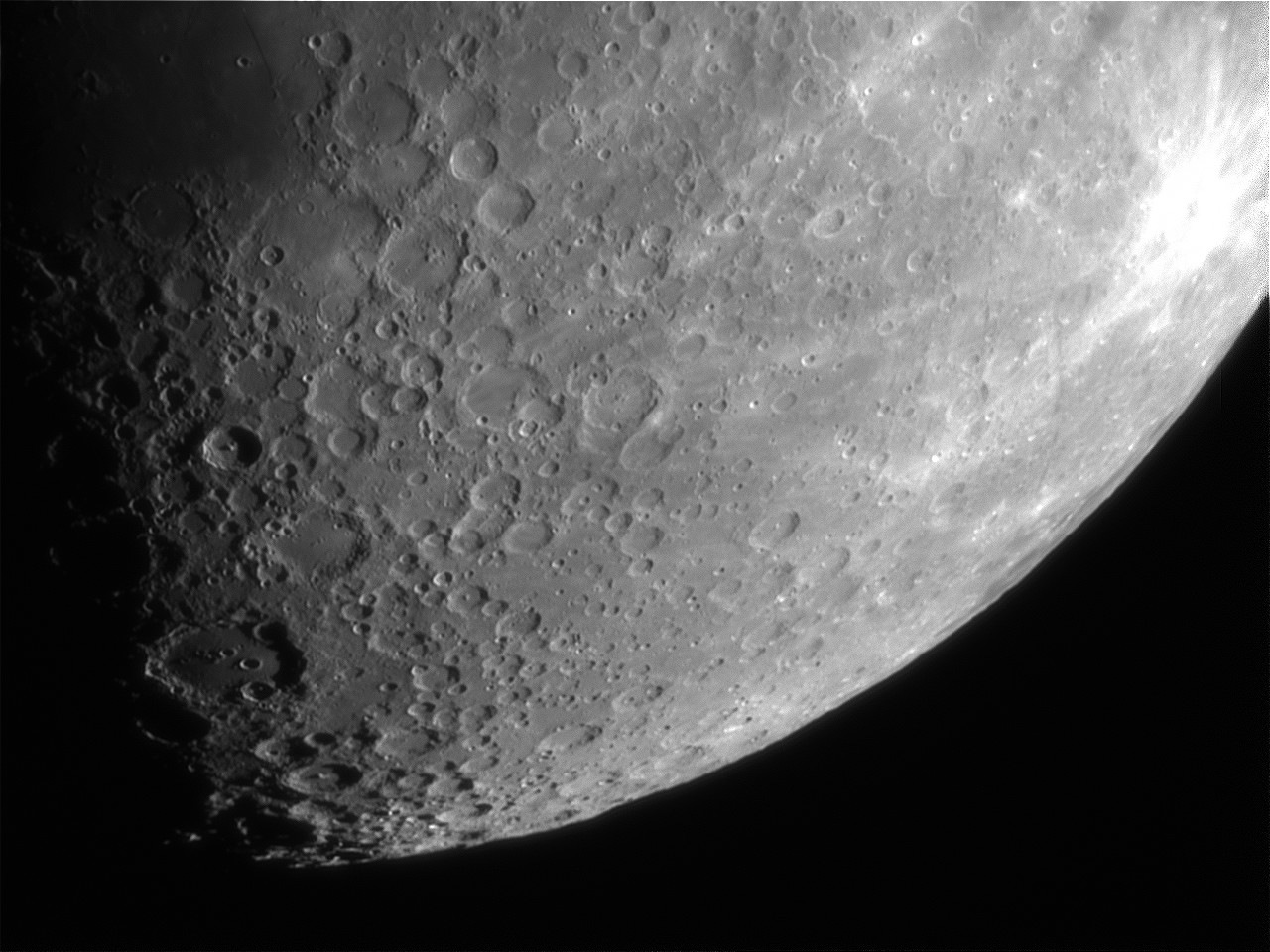 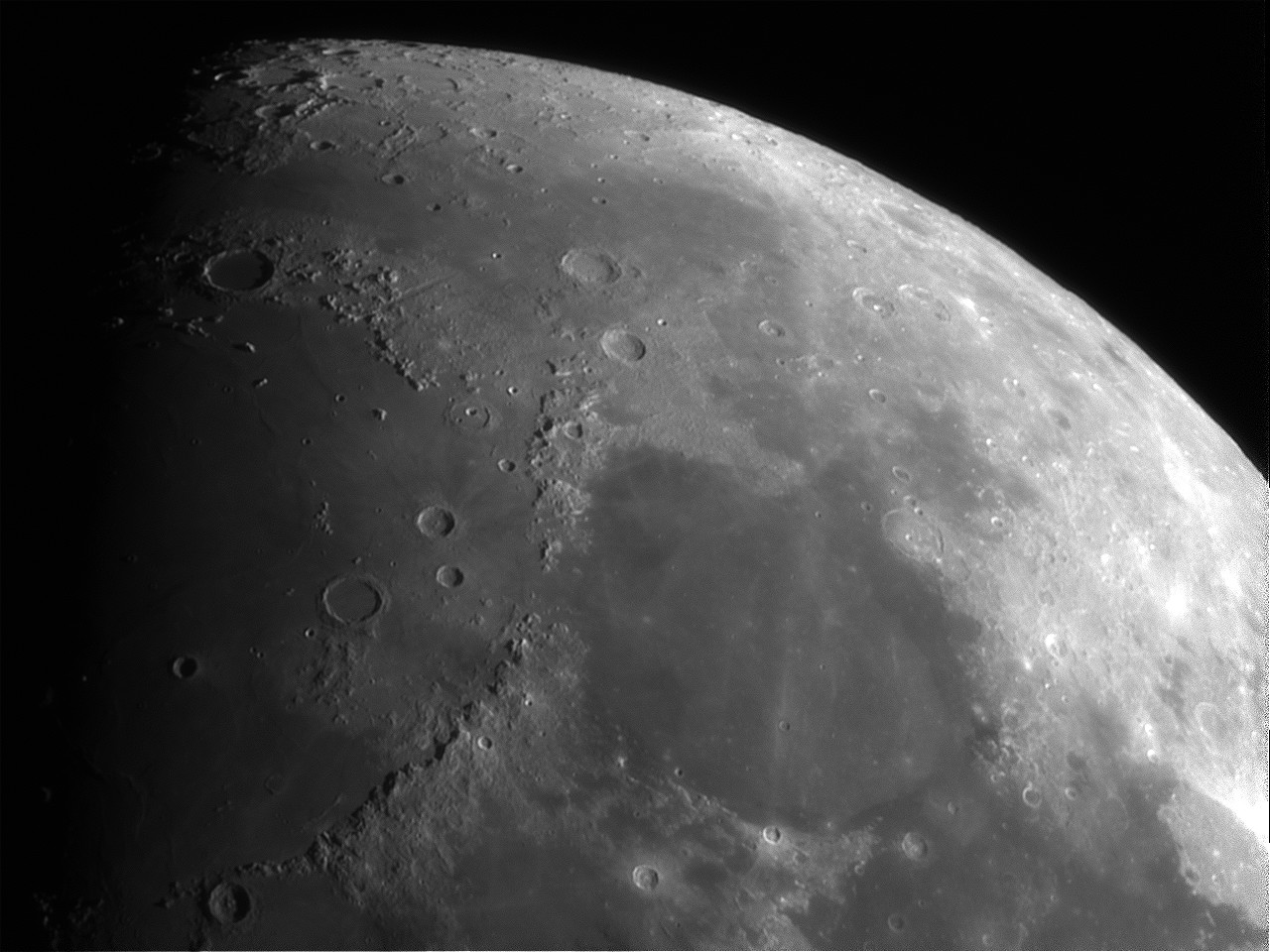 The moon through the 60 mm #7TE-5.  Untracked mount with very few frames on an ASI120MM with OTA bouncing around due to the slo-mo cables. 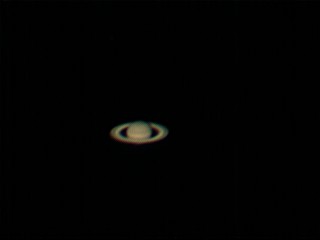 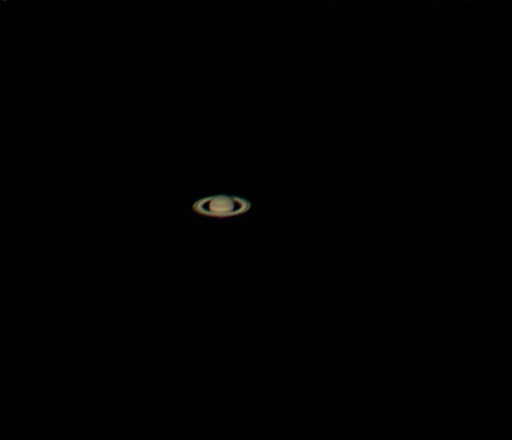 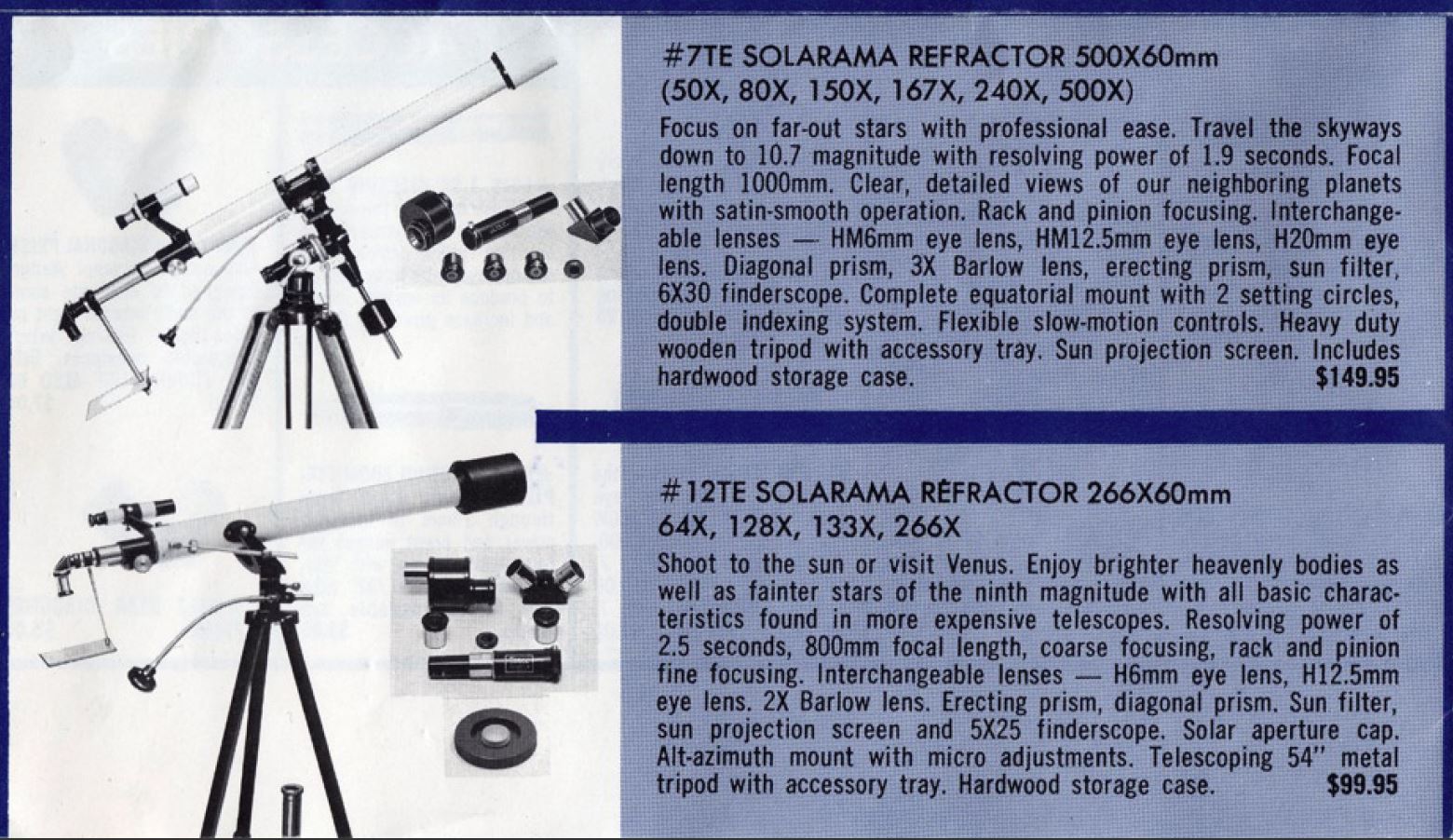 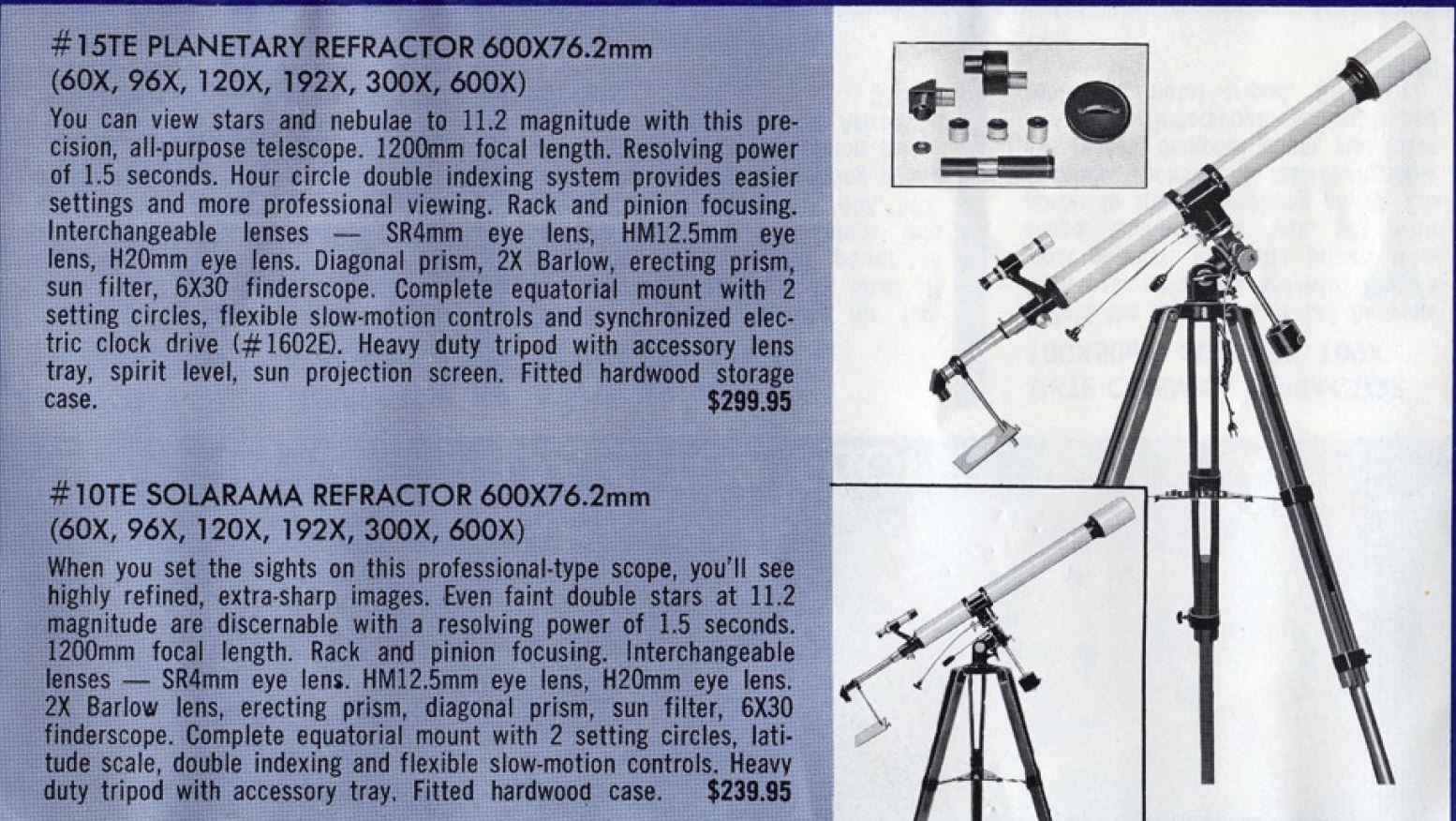 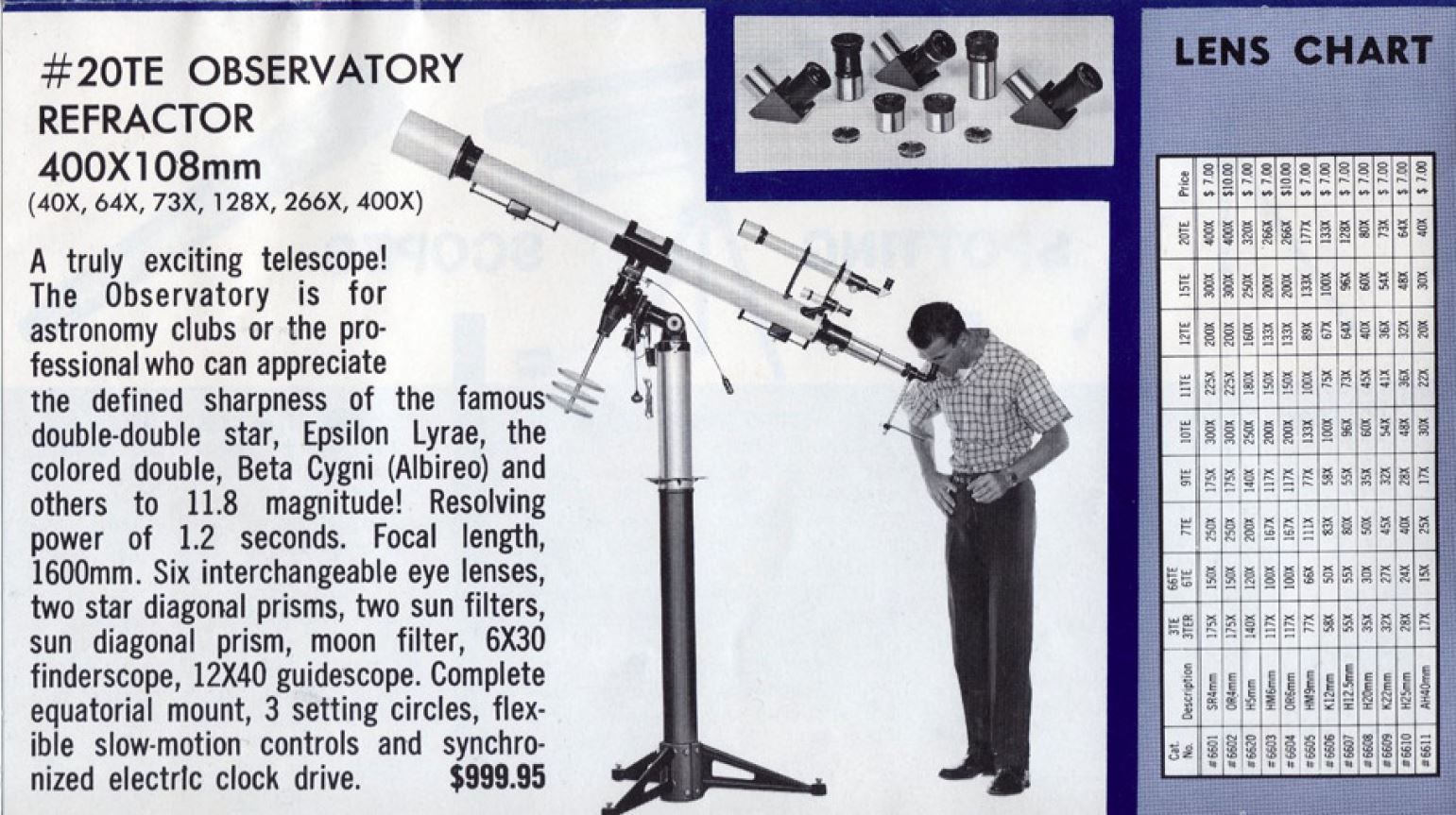 Learning about these vintage Tascos is like a lot of endeavors.  The more you learn, the more you realize how much you don't know.  I'll have more to say about these interesting scopes in the future.  See you then!

Back to Home Page