A Look at the Astro Physics AP305

Chances are, you never heard of a Honders before Astro-Physics introduced one back in 2009.  In its purest form, a Honders resembles a Newtonian (at least on the outside) complete with an eyepiece sticking out the side.  Refinements by Riccardi and others modified the design into a Cassegrain-like configuration, with the eyepiece out the back.  This version by AP is said to have a flat field over a 3 degree field, and full correction for the aberrations (spherical, chromatic, coma, astigmatism, field curvature, you name it) that plague less expensive scopes.  Perfect color correction is claimed from 400 - 1000 nanometers.  All of this is accomplished without the use of an external field flattener.  Instead, the Honders does its magic through an internal combination of lenses and mirrors.  Because many of the optical surfaces are spherical, a Honders may be easier to manufacture to tight tolerances.  A design element I found interesting is the second-surface coating on the mirror, which will not degrade over time due to exposure to the elements.  Also, the tube is made of a stable alloy that will maintain focus through wide temperature swings.  One advantage of a Honders is that, for a scope residing -albeit loosely- within the Cassegrain family, these things are insanely fast.  What you have here is a 12" scope operating at f/3.8, yielding an 1159 mm focal length (when was the last time you heard those three numbers used in the same sentence?)

To my knowledge, there is only one other telescope of this design available to the general public - the 11.8" f/3 Officina Stellare Veloce RH 300 Riccardi-Honders Astrograph, sold through OPT for $24,395.  I haven't seen this model. 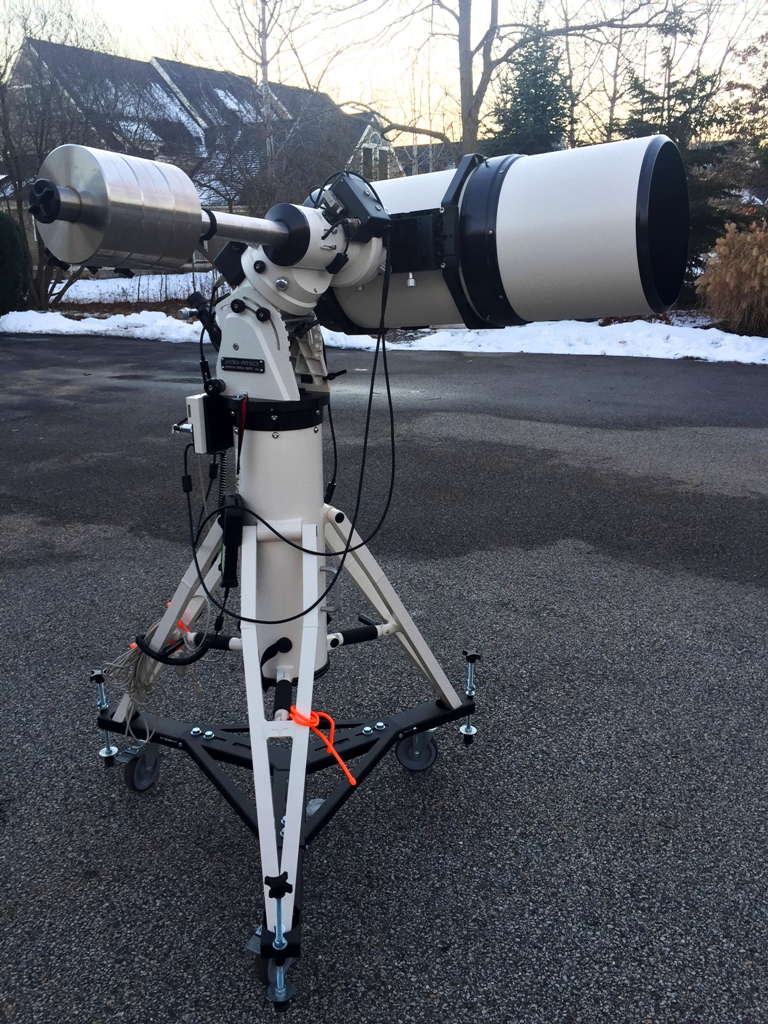 This is not a beginner's telescope.  The tube weighs 58 lbs and costs $22K, and you still need a mount.  Add what you'll need to get going and both of those numbers will go up.  That's a lot of commitment on behalf of a scope you're probably never going to look through.  I have hesitated writing this scope, as it lives about an hour away and I only get to see it a couple of times a year.  Also, with all its technology and its unusual configuration, I am not sure I am the perfect person to write about it.  I can, however, attest to the results I've gotten.  With my modest astrophotography skills, the Honders has me punching well above my weight class.  AP recommends their 1100GTO mount ($7,970 - $14,961, depending on options) and that's what we used.  Allow me to put in a word for that 1100GTO mount.  I used my usual trusty SBIG Sti auotguider and PHD Guiding software.  It was a cold night, so we wound up spending a lot of time indoors while the camera collected data.  For whatever reason, the autoguider did not get an accurate calibration.  I failed to notice this despite walking outside several times to check on the scope.  So the results you're seeing here are unguided.  With subs ranging from 3 to 5 minutes, the 1100GTO kept objects perfectly centered without the help of an autoguider.  As someone who's used to playing with CG-5s and AVXs, this level of tracking accuracy is astonishing.

It is said the greatest leaps in technology are the ones you don't notice.  A radial tire is better than a bias-ply tire.  However, you don't need to learn how to drive on a radial tire; you just drive.  This Honders is the same way.  Despite all the technology inside, you can use the scope like most any other.  It comes on the standard AP dovetail plate, and there are plenty of provisions around the tube and rings to mount finders, autoguiders, and even other scopes.  Also, unlike the astrograph you may have at home, you can (and are encouraged to) look through the scope.  I've panned around the sky and looked at the moon.  There isn't much to say, other than it appears to be a high quality 12" telescope, albeit one with an unusually wide field for its aperture.  To get the maximum benefit, you need to keep the eyepieces below 19 - 20 mm or so, or you'll "run out" of exit pupil.  The focuser is huge and smooth, and AP provides lots of various extension tubes so you can find focus with various cameras. 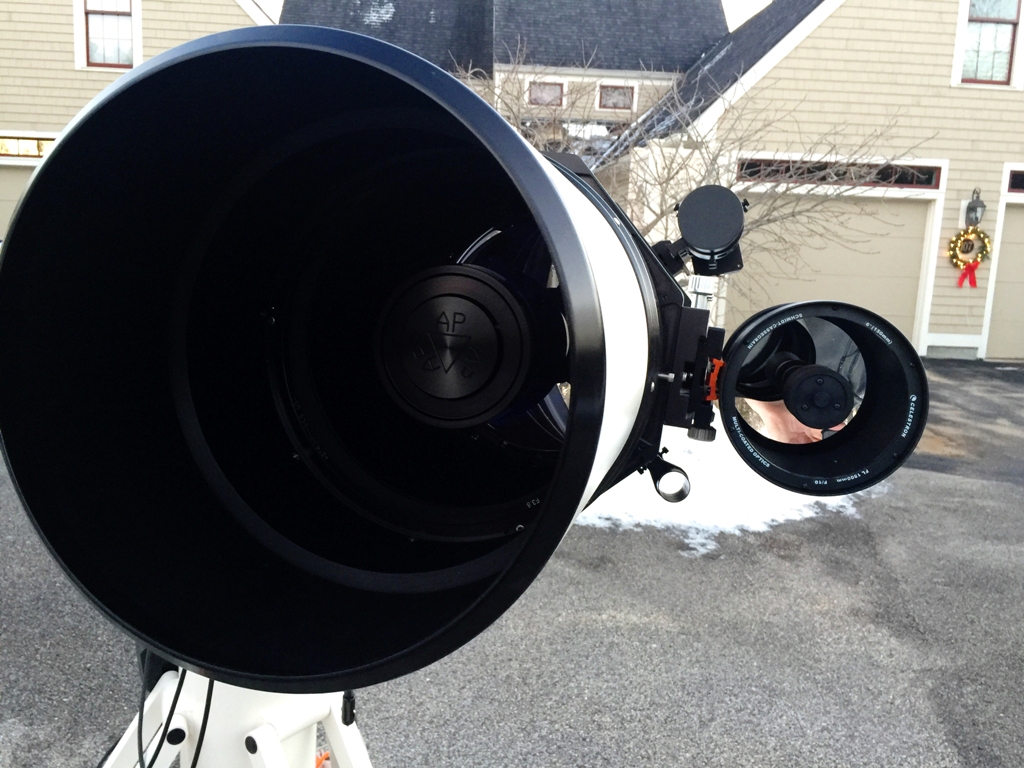 Looking down the tube.  That's a Celestron C6 mounted on the side for size comparison 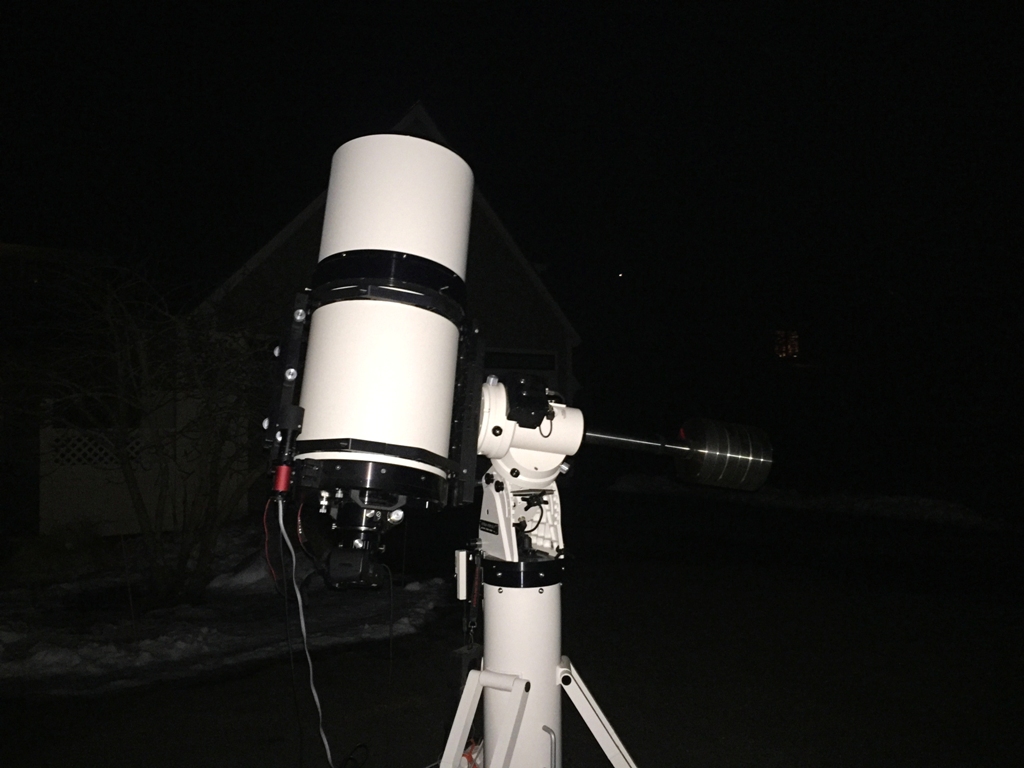 The Honders pointed straight up, collecting data on M33.  Canon EOS 5D Mk 3 is mounted on the back.  Small red item is an SBIG Sti autoguider. 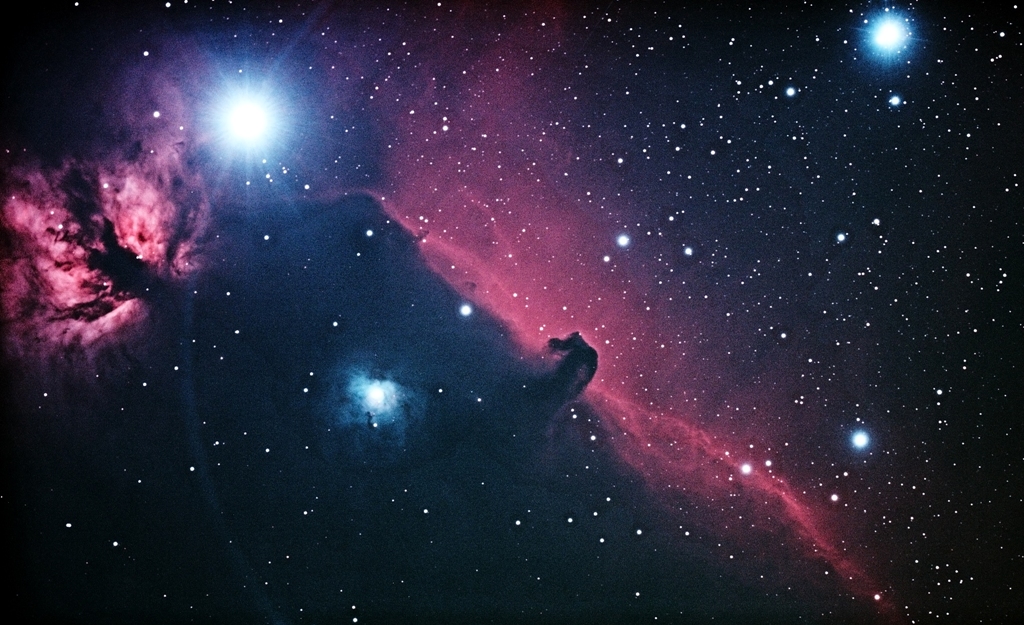 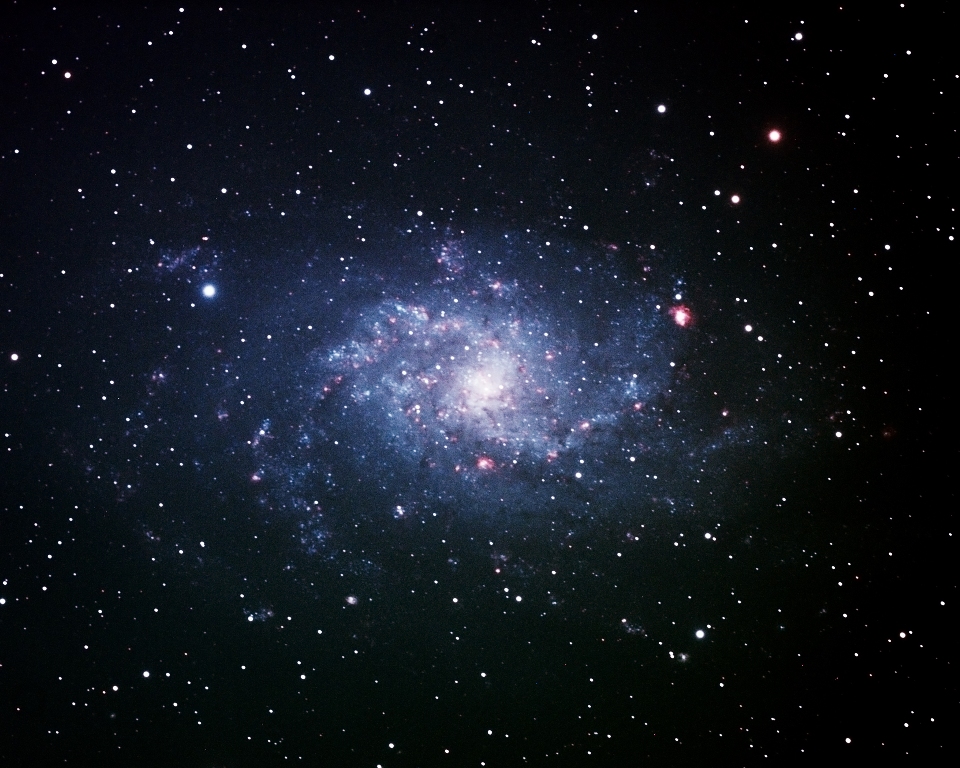 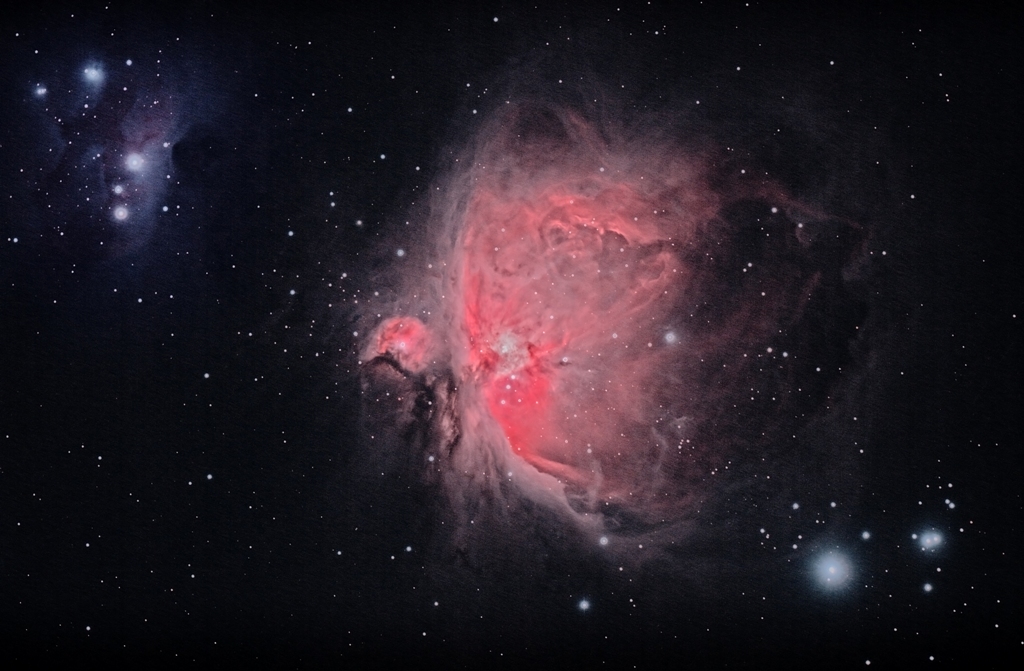 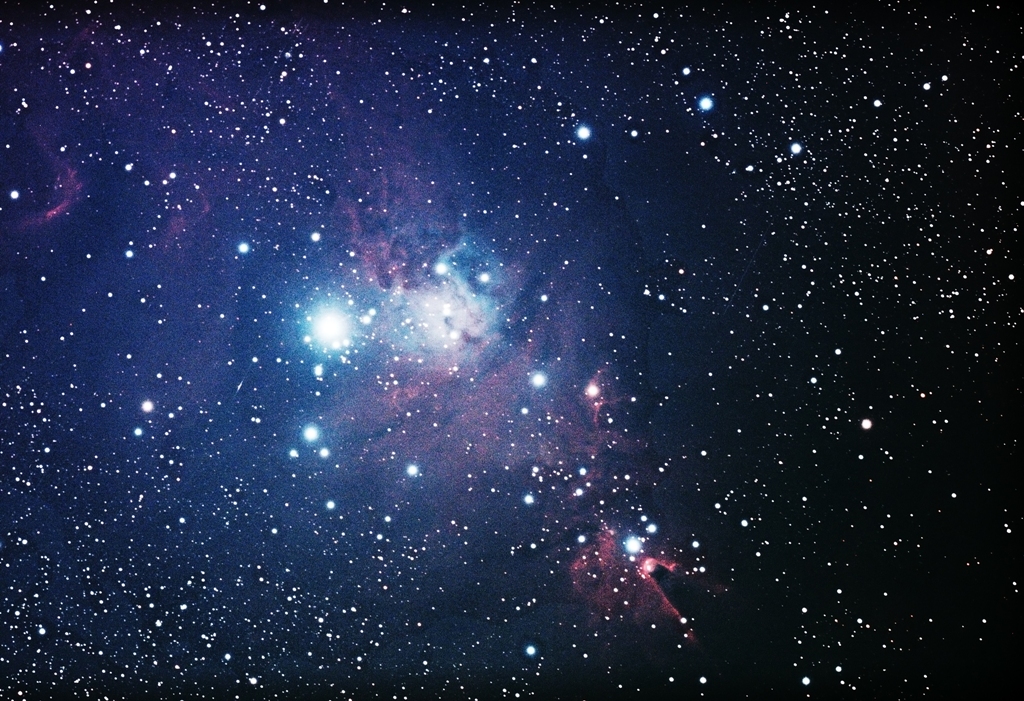 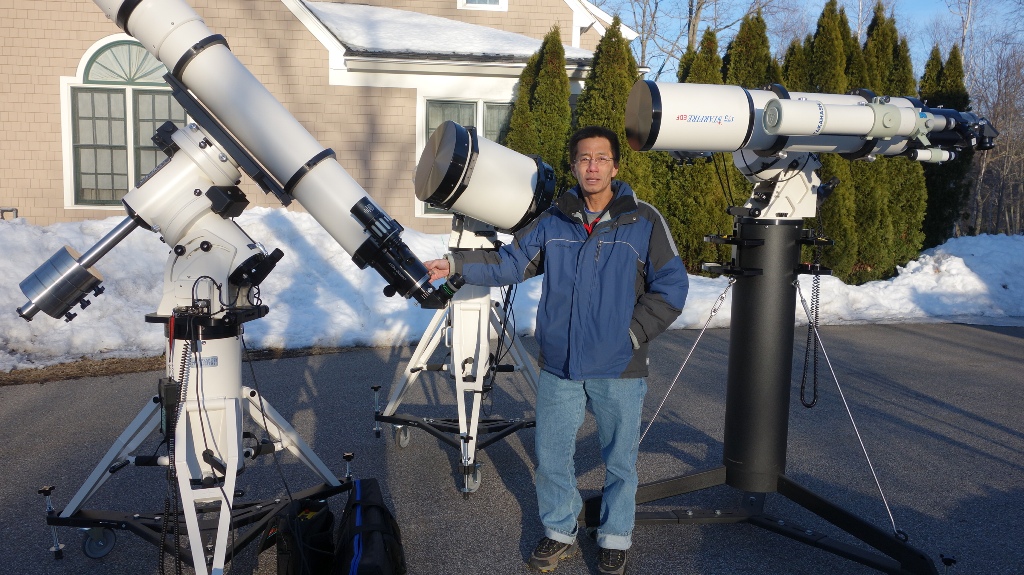 I know, I know.  You want me to move out of the way so you can see the scopes.

The images above were captured with a Hutech-modded EOS 5D Mark 3, with an Astronomik EOS XL CLS light pollution filter installed.  ISO was 1600.  Of the images above, the one that interests me is the Orion Nebula.  I had a hard time believing that 10 seconds was enough.  I started with 30 second subs, and it turned out to be too much - the central Trapezium section was blown out.  At only 30 seconds!  As it is, even with ~50 subs, there's some noise in the image.  If I get another chance this season, I'll clear my memory card and keep hitting it with 10 second exposures until I run out of space.

I won't insult your intelligence by "recommending" this scope - if you have the means and the desire, you know if you need this.  For those lucky few, I envy you. 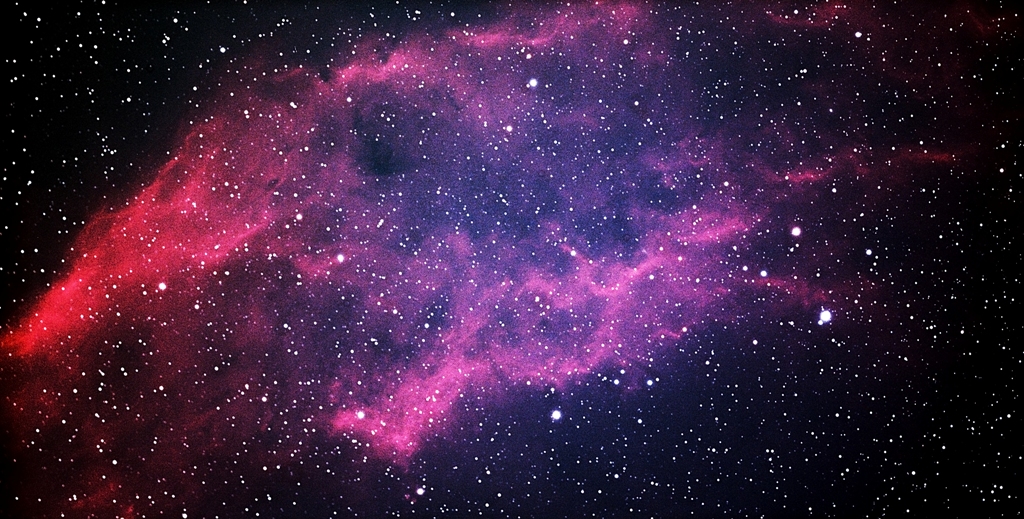 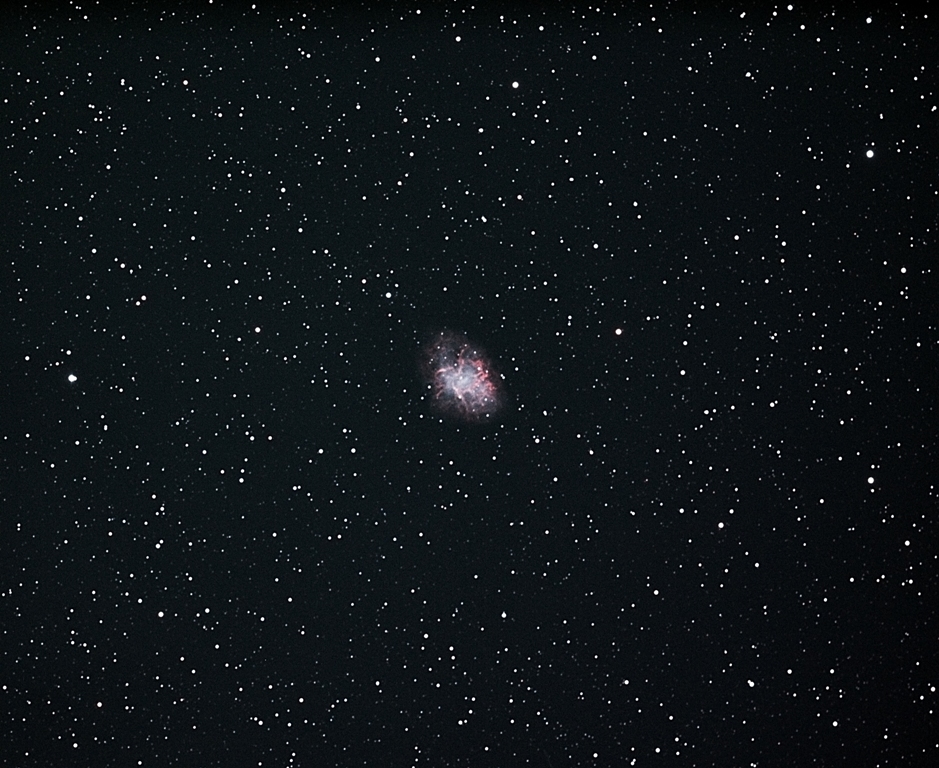 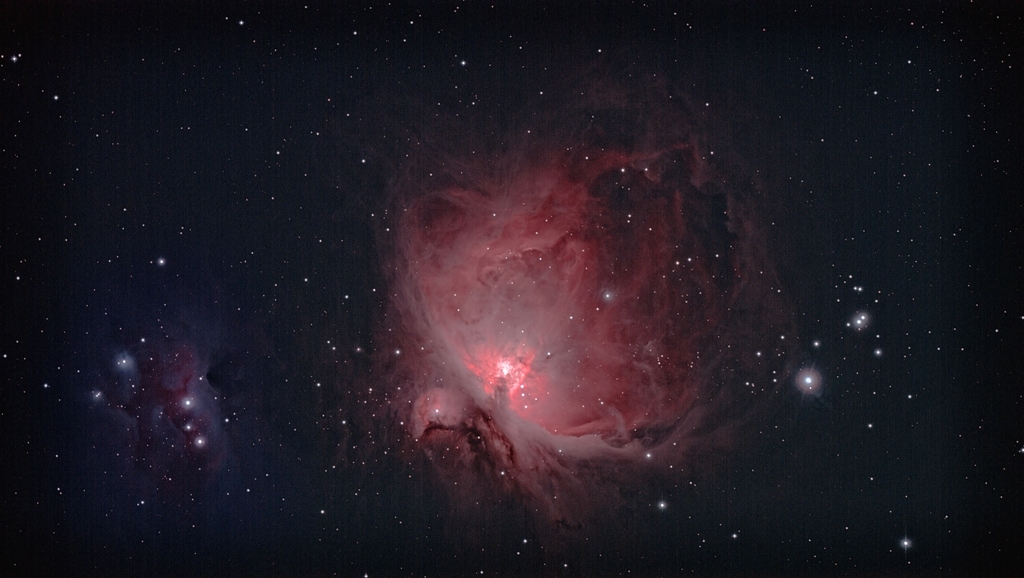 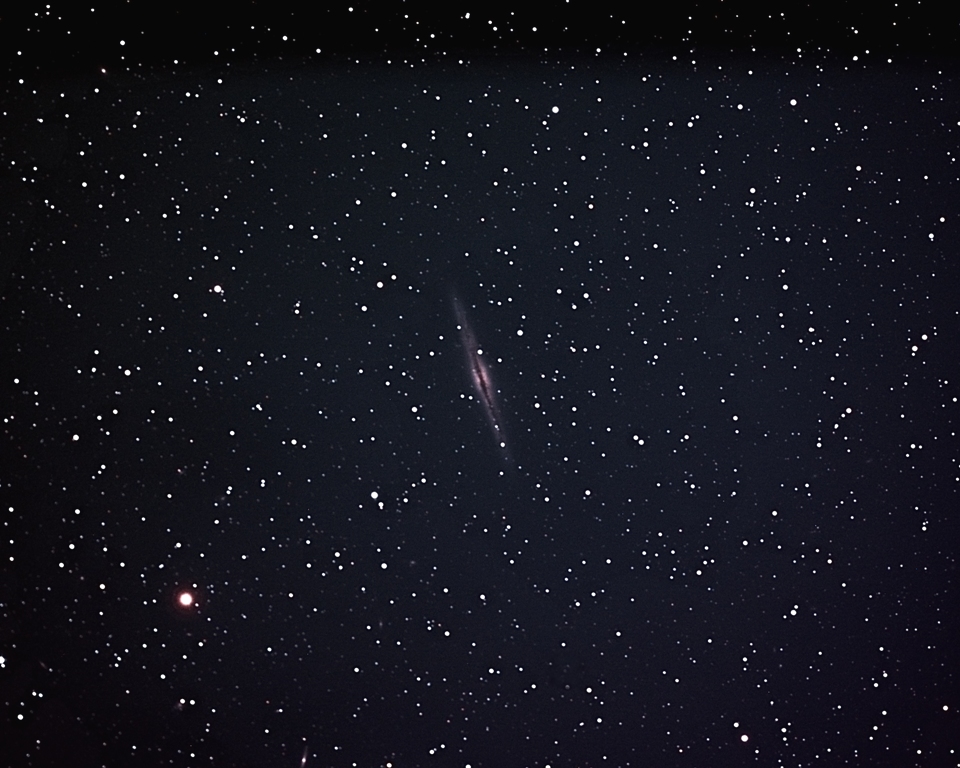