Ed Collects All the Celestron Schmidt-Cassegrains 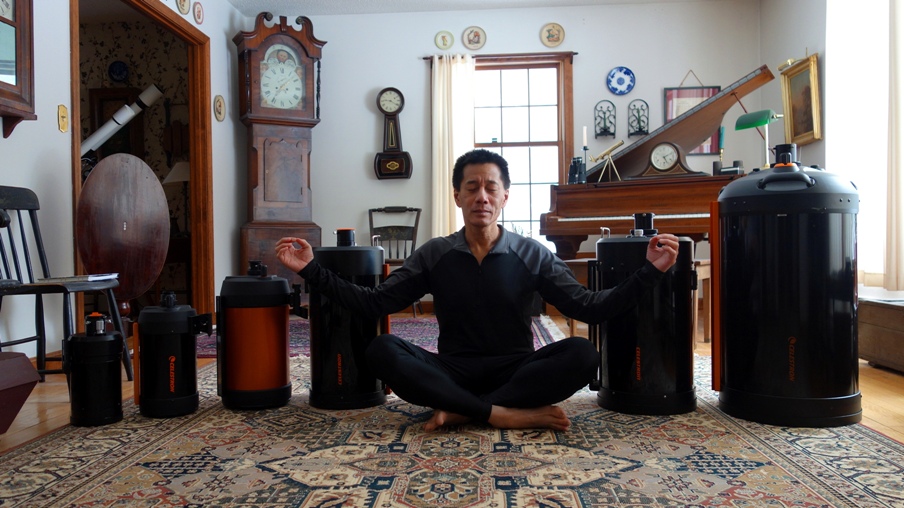 Telescope Nirvana?  In my happy place with all the current Celestron SCTs

For a brief period in February 2015, I collected and owned all the Celestron Schmidt-Cassegrains.  I say "brief" because as soon as word got out, I started getting phone calls.  "Ed, you don't need all those - will you sell me your Cxxx?"  With people gnawing at my collection, it's been hard to keep the group together, although at this writing, the collection has managed to stay together.  Also, for you eagle-eyed observers out there, I am aware that these aren't all the SCTs that Celestron ever produced - there were early, blue-and-white Schmidt-Cassegrains that are very rare and collectible today.  I don't count those.  You have to draw the line somewhere, and I draw at around 1972, with the introduction of the C8, which started the current series.  I also don't count the various smaller Maksutovs like the C90.

Celestron introduced the C5 as a smaller, lighter alternative to the C8, and it's been in the lineup ever since.  It's gone through several incarnations, from orange tube, to white tube, to black tube, and (as of this writing) back to orange tube.  Most of these have good optics and are acceptable for general viewing where portability is a concern.  Celestron's problem in the 1970s and 1980s was that it didn't cost much (if any) less to make a C5 than a C8, but for marketing reasons, they had to keep the price lower than a C8.  By the early 1980s, it was possible to trick out a C5 that cost more than a C8.  Offshore manufacturing has changed this, of course, and the new C5s can be had at attractive prices.  If you're looking for one, take your pick, as all iterations have their fans.  Some, for example, are staunch fans of the white C5s.  Me?  Much as I like the California-built scopes,  I have to admit the new inexpensive Chinese orange-tubed models have been really good lately.

The scope is small enough to fit on a CG-4 class mount with no problems.  Even a cheap alt-az mount like a Vixen Porta will work, and I've used mine in that configuration at star parties.  The C5 is also a good travel/eclipse scope, and a good alternative to a Questar, for those who don't have or can't afford those jewel-like creations from New Hope.

This is the newest model, and it's become one of the most popular SCTs on the market.  The extra 1" of aperture vs. a C5 amounts to a lot in practical use, and the scope isn't much bigger.  It will still fit on a CG-4 or a Porta, but is starting to get large enough that you'll be happier with a CG-5/AVX class of mount.  On a CG-5, you can get away with one 7 lb counterweight, instead of using the standard 11 lb unit. That 4 lbs may not sound like much, but if you transport the scope a lot, it adds up.  It's still small enough to pack away as a travel scope, or a second scope during longer sessions.  It's also a good alternative to a C8 for observers who place a premium on portability.

An 8" SCT is still considered the standard size for amateur astronomers.  See my tribute page for more details.  It's not too big and it's not too small.  The extra 2" vs. a C6 puts the scope into another league, both for observing and in its mount requirements.  At 11-13 lbs depending on what you have on it, you need a CG-5/AVX class of mount, and you'll need the 11 lb counterweight.

The C9.25 is smallest of the larger Celestron SCTs.  You often see people who have a C8 and nothing else, but a C9.25 owner usually needs to supplement the scope with something smaller for quick peeks, or for wide fields.

This is my favorite of the current Celestron Schmidts.  With a longer f/ratio primary (f/2.3 - f/2.5, depending on who you listen to) the C9.25 cuts a distinctive, long aspect ratio that is impossible to miss.  It weighs about 20 lbs.  Although it "only" gathers 1.25" of light vs. the C8, the scope has about 70% more internal volume, and weights ~65% more.  That's enough to kick it up into the next class of mount.  It will work on a CG-5 or an AVX, but for serious work, you really need a Sirius, Atlas, GM-8/G11, or CGEM to explore all that it can do.  This extra mount requirement alone is enough to keep people back in the C8 camp, and there's nothing wrong with that.  Also, the extra 350 mm of focal length vs a C8 begins to feel a little claustrophobic for some people; try before you buy.

It's a superb planetary scope, and is often bought as a poor man's substitute for a 7" Maksutov, or an expensive refractor.  Some of my best views of Saturn, ever, were through a stock C9.25.  It also does well on globulars and galaxies.  Where the scope can frustrate you in in low power, deep sky sweeping.  Seeing all of the Pleiades at once, for example, can be a challenge.  Quality control is excellent; I've never seen one that I would rate below "Very Good+" and most of them are quite a bit better than that.

The 2800 mm focal length is really starting to box you in, but the C11 is a new favorite amongst lunar and planetary imagers.  In fact, the moon is my favorite target with the C11 - go figure.  The focal length is just right with my eyepieces.  I just completed the Astronomical League Lunar observing program, and the C11 was a big help.  The only issue is all the dang light it collects.  Your night vision is ruined for the rest of the night.

A classic big scope.  Unlike the leap from the C9.25 to the C11, which is not that bad, there is a huge jump from the C11 to the C14.  Put another way, if the C9.25 to C11 gap didn't bother you and you get cocky (like yours truly) you are in for a surprise.  The extra 3" of aperture translates into ~60% more weight, and ~70% more internal volume.  And forget about Celestron's ads, which claim a 45 lb weight for the OTA.  My newer, triangle-back version tips the scales at 52.5 lbs bare.  Add a finder, big visual back, high-quality diagonal, and a big eyepiece like the 31 mm Nagler, and you can easily get up near 57 - 58 lbs.  A Losmandy G11 has a claimed weight limit of 60 lbs, so you're starting to outgrow that one too.  A CGE, Paramount, or one of the big A-P mounts is preferable.

In the early years, Celestron took pains to advertise the C14 as a "one man" "transportable" scope.  They showed pictures of dainty models using it (on a fork mount, no less.)  They've backed off this claim in recent years.  I am able - just barely, and not without significant psychological and sweat equity - to put it on my G11 mount, but after doing it a couple of times, I have to conclude that this is a two-man scope.  At f/11, it has a longer aspect ratio than the others, which doesn't help when you're moving it around.  Physically, it more closely resembles the C9.25, than the C8.

The C14 not a daily driver.  Its 3910 mm focal length limits what you usually look at, and if you don't have it on a permanent setup and use it three or four times a year, I think you are doing well.  In terms of light throughput, it resembles a good 12.5" Newtonian, but because of its ultra-long focal length, it feels totally different.  Imagine using your Orion XT12 with a 2.5" barlow permanently attached, and you start to get the picture.  The central star in the Ring becomes a real possibility, and the Dumbbell starts to take on that "big scope" football-like appearance.  The Virgo Cluster becomes a Virgo Clutter (that's supposed to be a compliment.)

The C14 gives lie to the notion that all SCTs are boring.  Everyone loves the C14.  Don't believe me?  If you get one, call your friends and tell them you have one.  They will come over to see it.

If you could have only one:

I know, I know,  I said above that the C9.25 is my favorite.  And you certainly won't go wrong with a C9.25.  But if I were starting out today and wanted an SCT, I'd get an 8" from Meade or Celestron.  Why?  It's still the best tradeoff for light gathering, portability, and cost.  Any gains earned by the C9.25 are negated by its heavier weight and the extra cost needed to buy a larger mount.  There's a reason the 8" was the first model introduced.  C8s and CG-5s are cheap and plentiful on the used market (good clean OTAs often sell for less than $400.)  Getting a C8 is like buying a Camry - it's not the most exciting thing in the world, but you know what you're going to get, and there aren't going to be any surprises.

If you can own two:

There's a reason that the C8 and the C5 came first.  They're spaced just enough apart that they occupy distinct niches.  I love my C6, and while it's different from the C5 and the C8, if I'm taking two SCTs with me and one of them is the C8, the other will most likely be the C5.  A bonus is that your CG-5 can hold either tube.

If you can have three:

Here's where things get interesting.

My inclination is to keep your C8 and C5, and top it off with the C11.  If you're ready to own three SCTs, you've got some experience under your belt.  You've probably looked through someone's C9.25, and you want one (a bit redundant; as nearly everyone who looks through a C9.25 wants one.)

If you're a performance-minded enthusiast and don't mind setting up the big stuff:

If portability is a big concern:

If you want a balance between the two: